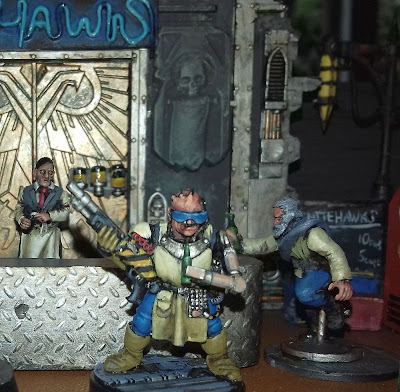 It was a quiet Friday evening, and the usual crowd were drinking at Nitehawks, enjoying the ambience while stepping over the larger bodies on the dancefloor. Suddenly, there was a tremendous explosion from beyond the city walls. A ship had crashed in the badlands!

Five heroes (in the broadest sense of the word) leaped into action. Quickly commandeering a nearby hovercoaster, they set out into the wasteland to rescue the flyers and salvage whatever they could find before the local chaos cultists stripped both ship and crew to the bone.


I'd got halfway through Blackstone Fortress, and was getting slightly tired of it, so I thought I'd try something slightly different. I've always liked stories where a crew of rogues have an adventure in space, like Serenity or Solo (or, to continue the alliteration, Space Captain Smith). While Hardwired is slick, the missions can get a bit samey, so I'm going to use the old Necromunda rules (not the new version), with a few tweaks.

- Sides are chosen as usual. The heroes have 500pts to spend on gang members (heroes) and weaponry as usual. Heroes can be chosen from any of the six gangs, and gain skills according to their relevant tables.

- The other side (the villains) are bought with 500 pts. It is best to keep them numerous and basic - 10 juves with autopistols, say. The bestiary from Outlanders can be used.

- Bottle rolls occur after over 60% of a side has been taken out of action.

- At the end of each game, roll for injuries as usual. Reroll anything related to territory or being captured. The heroes get 50 credits to spend as per usual, although everything is available at the listed prices. The villains get 50 pts more in the next game, to represent reinforcements, and rising stakes in the adventure.

- At the end of each game, each hero who didn't go out of action can roll once on the advancement table. Obviously, this will cause them to change characteristics very quickly, but that's half the fun of it. I still fondly remember Ned Killy, the ganger who lost an eye, gained a wound and inexplicably became a marksman after one particular game.

And that's about it! I may tweak these changes as we go, but it should be entertaining.

I love the fact that they all have suitably Grimdark names apart from Dave, who I hope will prove to be near indestructible in your coming games!

Dave is doing well, thanks! He's already acquired the "gunslinger" skill and has now got two wounds, making him about the hardest member of the warband. His ascent to victory has begun!