Now, on to some models that I really do like. Here are some random dwarves. I got the first two off ebay, and had the third lying around since I was 15 or so. I'm very keen on all of them. It seems to be the rules that elves always have to be beautiful and stylish, but dwarves are often quite caricatured, which makes for some entertaining miniatures.

Our first model (I'm making these names up, by the way) is Ambroth the Younger, son, confusingly, of Ambroth the Middling (Ambroth the elder became so old that he is now indistinguishable from a rock). He is a scholar by trade, but has joined the expedition to lend his limited magical skills to the group. 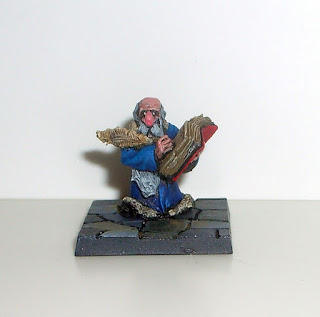 This is Girda, daughter of Mirda, a brave warrior and expert opera singer. Protected by heavy armour and extensive braids, she counts as a Templar under the Frostgrave rules. 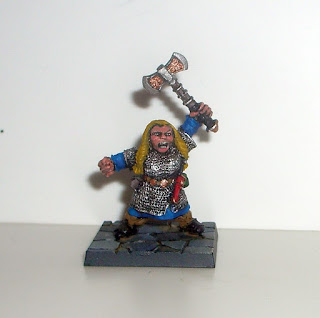 Olaf is committed to maintaining high standards in a work environment by... holding a standard high up. He's a very old GW model. I'm quite fond of the colour fade on his shield. 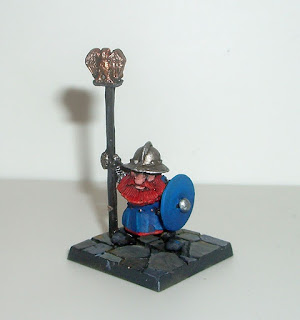 I don't know who made Girda or Ambroth. It seems a shame I have no idea who sculpted these really good, characterful models. But still, here they are.
Posted by Toby at 03:04

Great job, Toby. I love the female one. Really reminds me of Helga the wife of Hägar the Horrible. :)

Cheers - I've always thought that the dwarves needed a Brunhilda in their ranks!