There have been several exciting developments in miniature painting this week, at least for me.

1) I worked out how to activate the "follow" option! Now there is a button in the top right corner of this blog you can press to follow it. Pretty exciting, eh?

2) I bought the rulebook and a few miniatures from the Carnevale range, by Vesper-On Games. This is a skirmish game set in 1750 or so, in a fantasy Venice where the canals are full of Deep Ones and there are an awful lot of homicidal maniacs in party masks. The models look great, and the concept is really cool.

The only problem is that the translation in the rulebook (from Italian, I think) is a bit awkward in places. Of course, there have been some dreadful manuals written by native English speakers: the quality of GW Codexes ranges from pretty good to awful, and if you've ever tried to play Sedition Wars - well, you won't have succeeded. But it does rather spoil things when there are loads of small mistakes getting in the way of what would otherwise be a really entertaining read. That said, it's still pretty decent, and I got it cheaply, so I can't complain (although that's exactly what I'm doing).

3) I've got some painting done. Ages ago, I signed up for the Mantic "Crazy Box" Christmas deal, and got a bizarre and extensive selection of random models. Among them was a big tortoise monster. As with a lot of Mantic's stuff, it was a nice idea cursed by mold lines and a slightly-too-cartoony style. I replaced the head with a spare one left over from the Massallan Phallhounds (I still don't know where they came from) and painted him a bit like a creature from the computer game Mass Effect. Again, I tried using the zenith technique, spraying white paint from above onto him to simulate sunlight. 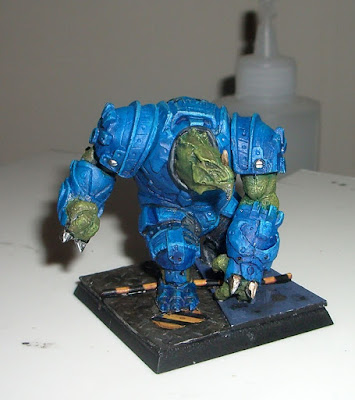 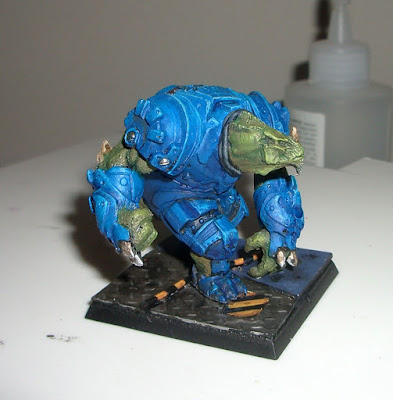 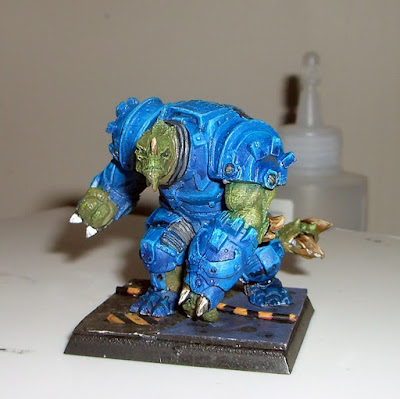 He's not the world's best miniature, and he still needs a little bit of extra detail, but I rather like him. I've learned that one way to improve a slightly uninspiring model is to replace the head with a more detailed or exciting sculpt. Now he's no longer gathering dust - well, now he can gather dust on top of his paint.
Posted by Toby at 10:09