Return of the Space Jockey (and Radio Boy)

Last week I watched Alien: Covenant, which was an entertaining and completely pointless film. It had some excellent scenes (especially the one in the sick bay) and a lot of pretentious waffle in between them. It seems that no explanation of the question "Where does the Alien come from?" can be as awe-inspiring at the question itself. I ended up with the sneaking suspicion that Ridley Scott had really wanted to make A.I.

But anyhow, the film inspired me to go back to the space jockey model I made ages ago out of half a tyranid, half a cap gun and a broken mouse. It was looking a bit worse-for-wear and rather unfinished. On closer examination of the Giger artwork, the jockey isn't just black/grey, as I'd thought: the pilot itself is a faded bone colour, while the rest of the machine looks grey/brown in places, as if bleached.

I had also left part of the "targeter" on the jockey: while my model is nowhere near an exact copy of the original, it was quite a large part of the Alien model, so I added one of my own. The end result (so far) looks like this: 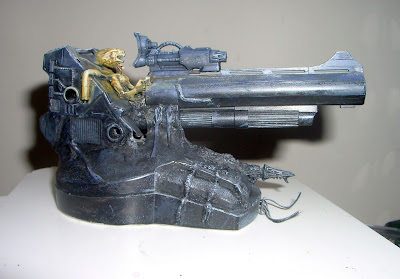 Here is a tour guide/genestealer magus for scale. 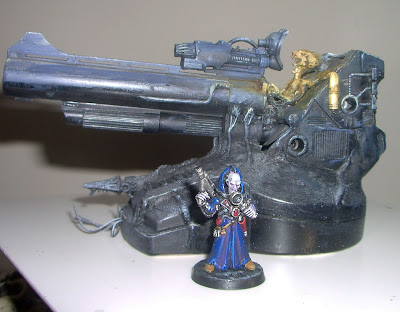 The pilot is a bit too brown, and I'll have to blend him down with some grey washes. But it's definitely an improvement. It does look as if he's grown out of the chair - which, in space jockey circles, is quite a compliment.

In other news, I've finished the sixth member of the ork commando squad. This guy is exceptionally dangerous, because he has the radio set and can order in airstrikes. Unfortunately, there is always the risk that either he or mission control will get excited and mix up the present position for the one they want bombed, but such is the price of success. Or stupidity. 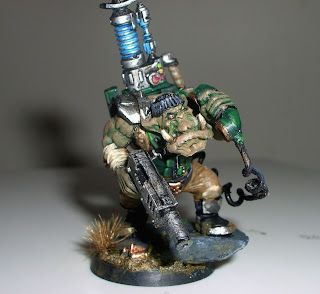 I ended up removing his spindly aerial, and replacing it for a suitably wonky-looking gun left over from a Skitarri kit. I think it worked quite well.

Yeah, I saw Covenant too. Thoroughly disappointing addition to the series. I don't know why I thought it'd be better than the previous modern ones, but I suppose I was hoping like hell it would.

I don't know what it is about Ridley, but he just seems hell bent on putting a crew of obviously incapable misfits in Space movies. He did it in Alien too, but it was an underlying theme. In Prometheus & Covenant it was the driving force! Covenant played out just like a re-shoot of Prometheus I thought.

But like you Toby, it did get me interested in Aliens again. I watched a fan edit of Prometheus that was recommended. It was a lot better, and believable, than the original movie.

Anyway, ramble over. I like your space Jockey, he's a great example of Kitbashing. Once you've washed the pilot down a bit it'll look ace!

I liked Covenant more than Prometheus, mainly because the action was better, but it's still not brilliant. I'm just not that interested in David the robot and the engineers. The Alien is starting to look increasingly like an attack dog that can run up walls. Do you have a link for the fan edit, by the way?

The washing process has commenced!

Yeah, I think I can find it again, but I'd feel safer if I could email it to you rather than post it here, wink, wink, nod , nod ;)