Get Me The Choppa! 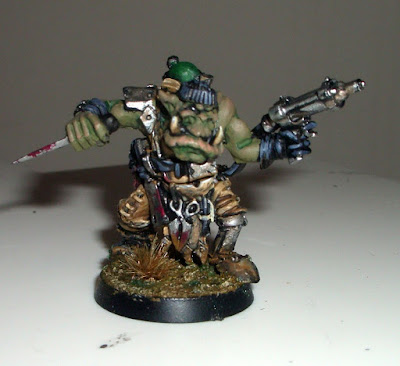 As the Armageddon campaign wore on, the Big Boss realised that it would be just as effective to break the will of the human defenders as to kill them all. So, he gave the order to his commando squads: the officers leading the Imperial Guard's resistance were to be assassinated.

One such officer was Lord Commissar Heinrich von Eefilmann, a pupil of Yarrick himself, whose ruthless efficiency put the ruthless efficiency of less ruthlessly efficient commissars to shame. A crack team of ork commandos sharpened their knives, gathered large backpacks and big coils of rope, and set out to achieve the impossible.

Sentries were throttled, throats cut, vehicles sabotaged, supplies blown up and even cable cars surfed in the course of that deadly, if rather anachronistic, mission. Finally, the death-blow was struck by Burk "Slasher" Gutrip, a veteran commando with a bionic leg and a collection of sharp implements that would shame an operating theatre (albeit a rather rusty one).

Burk stole von Eefilmann's head and brought it back to his superiors in triumph. But the mission was ultimately a failure: now that their commissar was dead, the morale of the Imperial Guard improved significantly, since there was nobody left to execute them every time they sneezed. 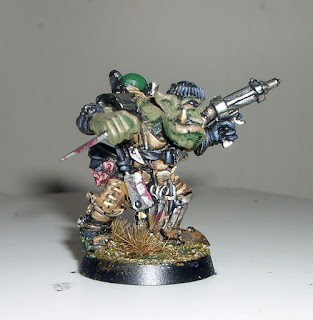 I've got to say, I'm rather pleased with this guy. Most of him is a metal doc figure, which came without a right arm or head. I used a Spellcrow head and a plastic right arm. His left leg was just a peg, which stuck me as a bit primitive. So I made him a new leg out of odds and ends, and I think it looks much better.

There really are some terrific metal ork models out there. The Space Marines might be covered in skulls and rosettes, but the orks look mean, as if they've had a try at fighting everything and come back for a second go. Next up in the unit is this guy, who will be the radio operator and comms genius just as soon as I've attached his head and painted him. I think he will be Plunk Teksmash. 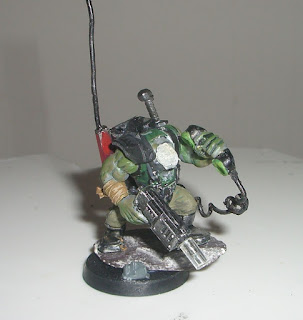