I wonder sometimes if I update this blog too often. I don't know how frequently you're supposed to add to a blog to "maximise traffic" or whatever the phrase is. But the way I see it, I might as well add things as I make them (and when I'm pleased with them), as most of this blog is for my own entertainment. Besides, multiple shorter posts are easier to read than a few very long ones, I think.

Anyhow, I've finished mucking around with the bottom of the blimp so that it slots into the stand and now "hovers" above the scenic base. 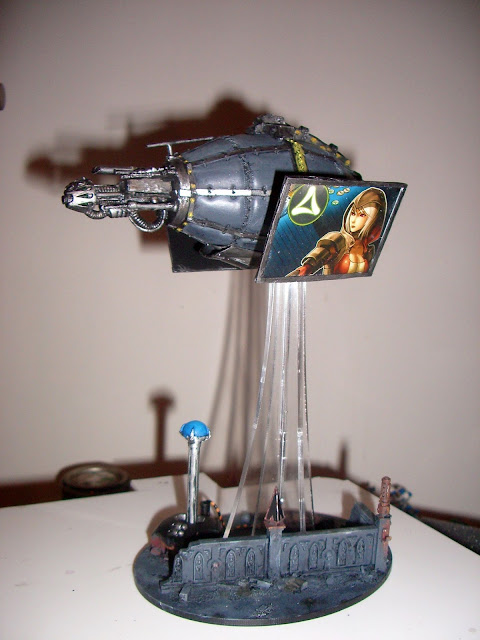 The mechanism by which the stand connects to the blimp itself is slightly crude, but it's hidden by the adverts and actually doesn't look too out of place with the slightly cobbled-together look of the blimp.

Here are some rules for the blimp:

It is not uncommon to see automated blimps drifting above the city, even in some of the warzones of the Scorched Earth. Some are leftovers from an earlier age, advertising all sorts of luxuries that have not been available for decades: others have been refitted to sell products, offer services and spread propaganda to the citizens below.

The advertising blimp is treated as a piece of terrain. It cannot harm other models or be harmed by them. Every turn, the blimp moves 2 d.6 inches in a random direction. If its base comes into contact with a structure or model, it immediately stops. Roll a d.6 to see what effect the blimp has each turn.

1-3: A new life awaits us in the off-world colonies! The sight of rampant commercialism fills the combatants with hope for a better life. All models within 6" of the blimp gain +1 leadership.

4-6: Look at the shiny pictures... Distracted by images of soft drinks, sushi or scantily-clad humanoid females, all models within 6" of the blimp suffer a -1 penalty to their leadership.

All such bonuses and penalties cease to have effect if the blimp moves more than 6" from an affected model.


As an added bonus, I was tempted to direct you to the song "The Blimp" from Captain Beefheart's album "Trout Mask Replica", on the grounds that it's sort of appropriate, but really, you'll manage without it. Of course, you could just listen to Zeppelin instead.
Posted by Toby at 14:42