This week, I have been mostly painting cars. I decided to get the cars from the Mantic terrain pack painted to a reasonable standard. They're from the Walking Dead game, and are pretty decent, really, especially since they're one-piece vaccuum-formed things you could probably use as a jelly mould. They're all sculpted as damaged, although I reckon the pickup trucks could still wobble along. I did briefly consider converting one into a "technical", as used across the world's more budget warzones, but eventually I couldn't be bothered. Besides, they look fine as it is.

I also thought I'd have a go at some lighting effects. For £2 I bought a small torch at Tescos and glued it to a base so it would stand on end. I then painted it grey. For the light itself, I used the ball and cap from a deoderant. This came as translucent white plastic, and so would let the light through. I painted the sides of the cap but not the top, to allow the torchlight to flood out.

Here's the light when not turned on. It looks quite futuristic and maybe vaguely fantastical, too. 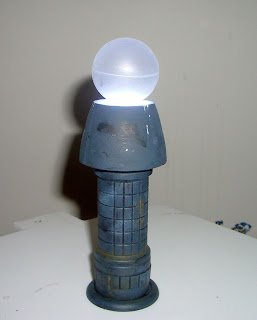 And here it is in its weird, blurry glory: 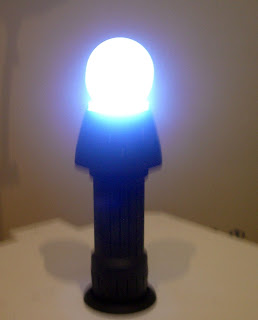 My eyes, my eyes! It's a bit crude, but as an idea I think it's got promise.