This week, I've been making some more civilians for the town, and trying out a couple of new painting techniques in the process.

The lady on the right is a slightly converted Warhammer witch elf from many years back. I tried to paint her to look a bit like Pris from Blade Runner rather than a standard "booby lady", as a friend of mine calls such models, but I don't think either the miniature or me was up to it. For the arms and body, I tried to suggest thin cloth, through which the pink of the skin shows. It sort of works, but it's not very striking.

The man on the right is a 40k mystic from an Inquisitorial retinue. He's exactly as he came. The sunglasses and bionics contrast quite nicely with the dark skin, but either I didn't highlight the face enough or the camera has washed it out. 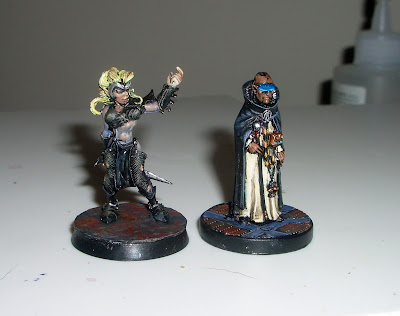 The third person was converted from a running Russian soldier from Warlord's winter Russians sprue. I made a bar stool out of odds and ends and used an arm that was holding a Molotov cocktail. I chose the most weathered-looking head for him from the Frostgrave soldier sprue. Amusingly, he looks quite like Earnest Hemmingway, who spent quite a lot of time doing pretty much just this.