Rust in the Badlands

I've been busy this week, by which I mean I've been sticking a lot of models together. Part of this is an attempt to use up the huge number of robot legs I was sent by Ramshackle Games, either in generosity or error.

Many years ago, the authorities decided to reclaim the land between the safe zones, where only mutants, wild beasts and heavily-armed caravanners ever go. Because the work was hard and the terrain hazardous, they sent out large groups of specialist robots to do the heaviest terraforming. None of them returned.

Travellers in the wilderness occasionally see the huge, corroded forms of the robots standing motionless on the horizon. But descriptions of how they look and what they carry vary from witness to witness, and the machines have a strange habit of going missing whenever the scrap merchants venture out for them. Rumour has it that someone, or something, is repairing and rearming them. 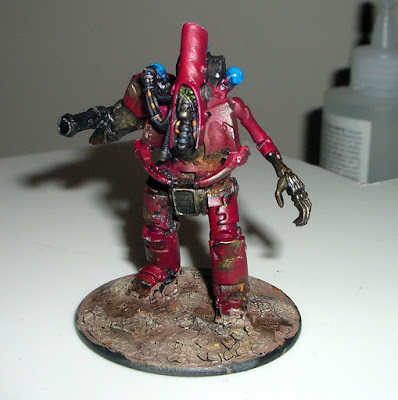 This robot was something of a test model. For the first time, I used what I think is called a zenith lighting technique, which is where you spray the model black from below and white from above. This represents the angle of the sun making some parts brighter than others.

I also used quite a "rough" style of painting, with a lot of corrosion and patina, and even some weathering pigment for the worst of the rust. I feel like I've not really finished it off, but I think it does look quite good as it is, and I'm reluctant to do much more. 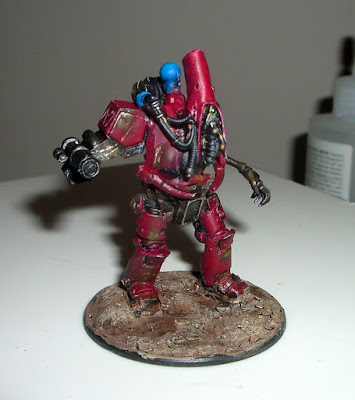 I've started on the next robot, which is going to be a mechanical dinosaur. 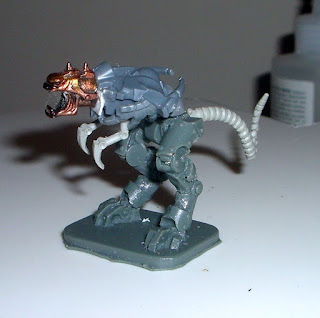 Yeah, he needs a bit more work, but the colour scheme's lookin good :)