Grisly Ghouls From Every Tomb

The great Tom Lehrer once described folk music as "the fashionable form of idiocy among the middle classes". A while back, zombies beat Bollywood for that title and over the last few years we've seen a huge number of zombie themed games. Everyone likes zombies, it seems - except, ironically, zombies, because they're too busy lurching around and eating people to care.

I went for one of the smaller and more obscure titles: Warlord Games' Project Z (pronounced Zed because this is Britain dammit): partly because I didn't really warm to Zombicide, and partly because Mantic's Walking Dead game looked like it didn't have much flexibility (nice models though). Also, Project Z is a wargame rather than a boardgame, which I think gives it more options for replayability.

The models in Project Zed are made by Wargames Factory, a company whose products vary an awful lot. These models are exceedingly good, by which I mean both "well-sculpted" and "disgusting". 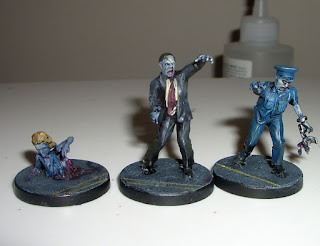 The lady on the left (or rather, about 60% of her upper body) wins the Most Grisly Zombie prize. 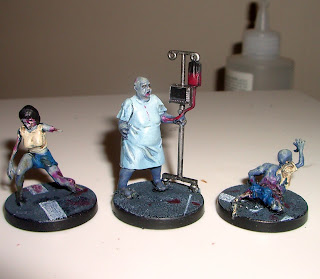 The woman on the left here is my favourite of the lot. I'm very fond of the guy on the right, though: he has been run completely flat across the waist and has tyre prints over his midriff. Lovely. 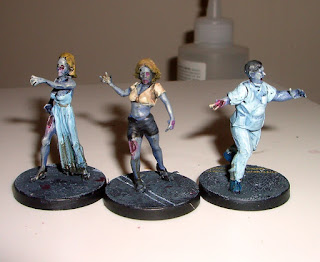 I decided to paint the zombies in a limited range of drab colours, so that they would contrast with the living humans in the set. For consistency, I gave them all the same skin colour. I went for a look like the zombies in the original Dawn of the Dead, with grey skin and lurid red blood (if you're interested, I wrote a review of Dawn here: https://www.sffchronicles.com/threads/567869/). The skin is Vallejo Luftwaffe uniform (blue/grey) shaded up with a bone colour. The blood is thinned down magenta from Coat d'Armes, with a bit of Strongtone added into the deeper wounds for shadow and general rot. I think the magenta works really well over the grey flesh. 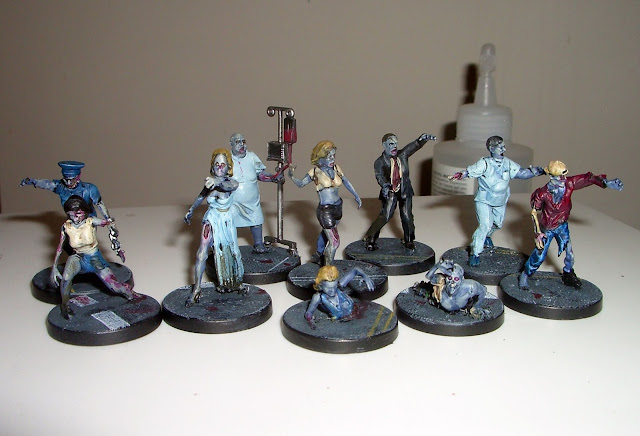 Next will be the human heroes. There are two teams in the basic set: general survivors and - as per Dawn - marauding bikers, too!
Posted by Toby at 05:22