In the 41st millenium, an ork commando unit was accused of a crime that it almost certainly did commit. These fungus-based organisms promptly escaped from a maximum security hole in the ground to the Necromundan underworld. Today, still wanted by the Imperium, they survive as soldiers of fortune. If you have a problem, no-one else can help, and if you can find them, you probably now have an even bigger problem than you started with.


Work continues on the ork commando squad. As well as the enormous ork who looks like Lee Marvin (Lee Morkvin?) there is now a ferocious and wily commando leader (Orke Waaagate?). Here he is, gazing vacantly across the battlefield while enjoying a fag.


His body and cloak come from a Mantic model, with a space marine power fist in place of the right arm and a Spellcrow head. The left hand was cut from an arm supporting the barrel of a gun and turned upside down. I drilled in a bit of wire for the cigarette.

This chap is a heavy weapons operator. The only thing I changed was the head. He's got the primitive weapons and ferocious look of a WW2 commando, as emphasised by the colour scheme. I think he needs a few more knives and bombs strapped to him. I shall name him Bob. 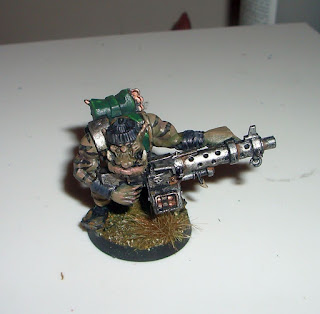 The last of the commandos, as yet, is the unit's tech expert and repairman. He is based on an old metal mek, with a new head and a plastic right arm. The model was dirt cheap, as incomplete miniatures often are on ebay, and is fantastically detailed. I cut the model's banner pole down a bit to reflect the fact that he's being "subtle". 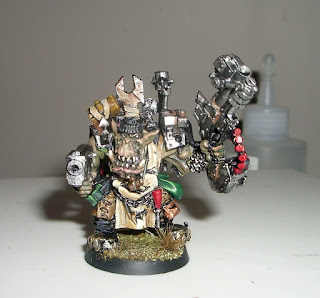 I've got 10 commando heads in total, so it makes sense to make some more. At the moment, I'm planning to include:

I think that covers it, although perhaps I ought to aim for a dozen...