In terms of actual painting, it's been one of those times where you start half a dozen things and finish none of them. However, I have been able to do a few bits and pieces.

This guy was converted about 15 years ago from a small, boring space marine who was having a bit of a stroll. He's now an old man. The bizarre apparatus around his head makes me think that he's a psychic (probably on Dr Who circa 1978). I made a tentative attempt at object source lighting. 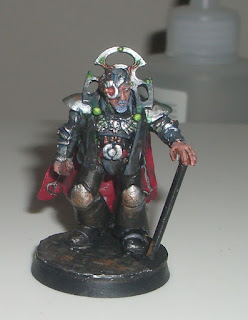 Whether you like the style, some of the best-sculpted models on the market must be in the Infinity range. This robot guy is in an excellent pose, pulling his pistol as he races forward, and the sculpting on his coat is fantastic. I replaced his right arm, because it was across the body and spoiled the motion of the figure. He cost me £2 at a wargames fair. The camera has flattened the colours somewhat. 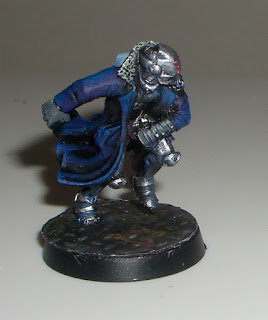 And finally, I've found a use for the robot legs I was sent by Ramshackle - at least, one pair out of the 12 or so they sent. I used some Necron bits that James gave me, and a head left over from a techpriest that was out of scale with most other models. I see him wandering across the desert, perhaps leading a group of homemade minions. 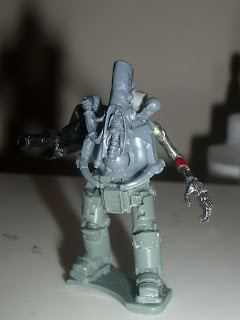 Other than that, I am waiting with bated breath for the arrival of Project Zed. If the postman doesn't bring it tomorrow he can forget about dogs - I'll savage him myself, groaning "Brains!" as I do.

Email ThisBlogThis!Share to TwitterShare to FacebookShare to Pinterest
Labels: Leftovers

I really like your 15 year old conversion Toby. An old baron or military adviser that never knew when to quit?

I agree about the Infinity minis, they do look great. Their just too damn expensive :(

That last conversion is coming along nicely too!