Well, I was going to write a lengthy post about 40k, ending in a proposed campaign setting onboard a massive spaceship. But now my camera is up and running (but still rubbish), I thought I'd post some pictures instead.

I have been painting Colonel Schaffer's Last Chancers, a unit of Imperial Guardsmen from the penal divisions. The concept of the unit is that they are a group of low and desperate criminals with a wide range of dubious skills, picked for the most dangerous missions. Unsurprisingly, there are a dozen of these dirty fighters in the unit.

I really like the models. They seem to have been scooped up from half a dozen times and places - including, it would appear, the Russian steppes, a Tiger tank, the American prairie and the Burmese jungle, from their outfits. I didn't paint them with quite as much detail as I would individual characters, but I spent a reasonable time on each one. And this is how they came out.

From left to right, here are: Animal, a loon who has a meltagun and a pair of trousers; Demolition man, who carries meltabombs and the like (as well as having a lasgun that looks remarkably like an AK47), and Grease Monkey, who seems to be a (not very successful) vehicle driver. 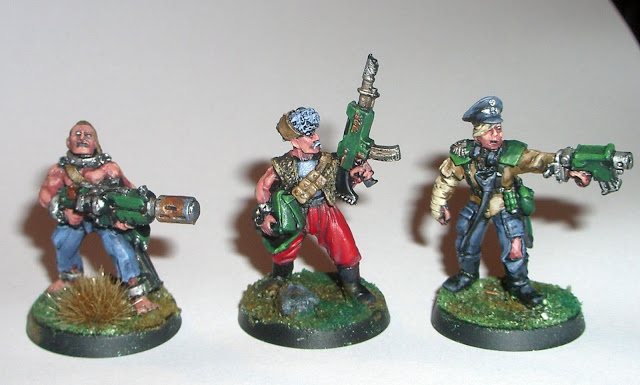 Next up we have Shiv (an assassin); Warrior Woman (a close combat fighter) and Hero, who holds up enemy units with his inevitable self-sacrifice. I gave Warrior Woman stripey leggings like Tank Girl, because she looked rather stupid dressed like a Roman cheerleader. 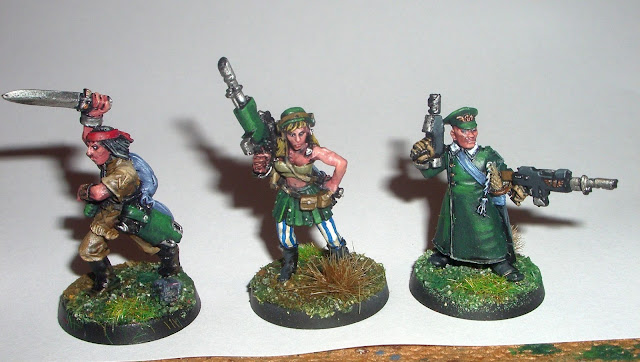 .
Here we have Brains, the radio operator; Ox, the heavy bolter man; and Scope, a sniper. Personally, I think that Scope is the best sniper I've seen from GW, and much better than the Vindicare model. According to the background, Brains and Ox are good friends. Perhaps they intend to buy a farm with some rabbits. 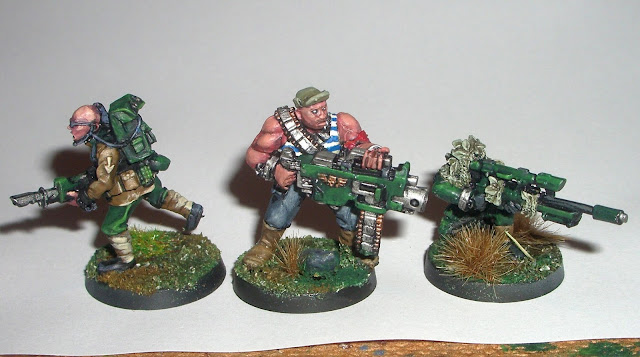 Last of all, we have Fingers, who is apparently a skilled thief; the Colonel himself, together with plasma pistol and cigar; and the excitingly-named Rocket Girl, who is a girl with a rocket (actually, a girl hiding behind a rocket). 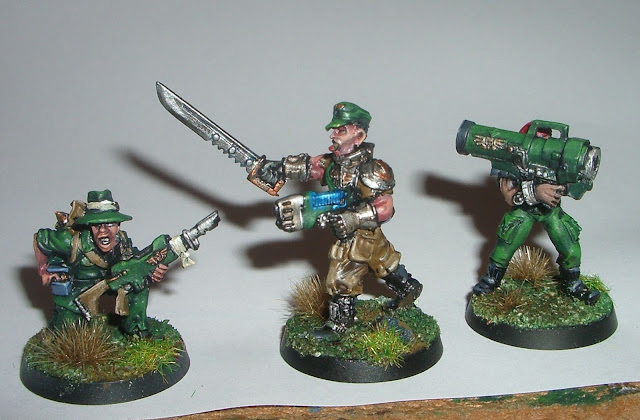 In painting them, I used a fairly limited selection of colours to tie them together despite their absence of a uniform. Needless to say, they look much better in real life. Not that they're really alive, you understand. Anyhow, it's been a nice change to paint a squad and not to be converting anything. I suppose I'll have to get back to the daily grind of making a Victorian on a jetbike riding a dragon made out of string, or something like that.