Inside the Filling Station

Here is the interior of the filling station at the moment, complete with workbench and power armour frame. There are a couple of posters on the wall, which are hard to make out here: one of a girl on a motorbike and the other a cutaway diagram of a 1950's car. Hopefully it looks enough like the Red Rocket station in Fallout 4. 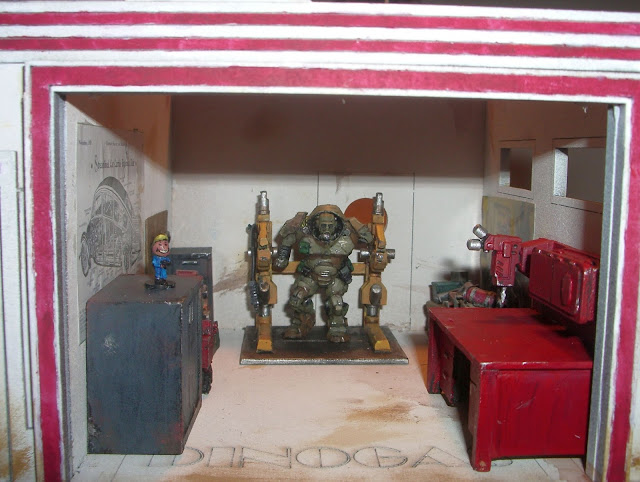 I think I've finished with this bit of the set for now and will move on to the other areas, especially the rest of the building/shop and the petrol pumps (which probably pump atomic power, somehow, but anyway, that sort of thing).

In other news, I'm currently painting a set of Schaeffer's Last Chancers, an Imperial Guard penal regiment. They're coming along nicely, although I'd forgotten what a pain lead can be to paint. I've not done any conversion work on them, so I'll post pictures once they're finished.

Wow this is looking amazing Toby. As a piece of terrain it's very atmospheric. I think it would benefit from some extra detailing as garages are usual a real mess with tools (at least mine is), but then I suppose you're moving into the realm of diorama building rather than terrain.