A rather short post, this. I painted up two of the Van Saar scientists over the last couple of days. Here is the leader of the gang: 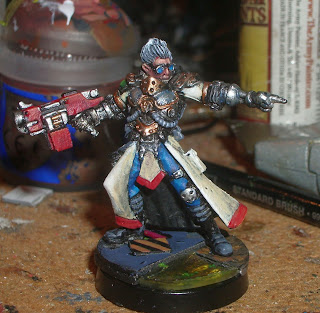 I think he looks quite good, in a primary colours sort of way. It's not the subtlest paint job, but it does have quite a nice dramatic feel. His hair needs a bit of tidying up, but beyone that, I don't think there's much that I can do. The sludge on his base was made with Water Effects.

The second model was the flamer lady I assembled last time. I'm not going to put a picture up, because frankly, she looks godawful. Maybe it's my rubbish camera, or the rubbish lighting, or my rubbish painting, or a mixture of all three, but it looks very crudely done. I'll have another go, but it's going to be tricky.