I've not done a vast amount of painting and converting this week, mainly because the real world has got in the way. When I say "real world", I actually mean "playing Fallout 4 in the real world". Add to that the fact that the Alien Isolation game was going cheap on the PS4, and it all adds up to crawling through a lot of retro-looking tunnels.

Anyhow, I did manage to get some work done on the scientists. For their leader, I removed the weapons and added a bolter made out of odds and ends and the pointing robot arm from a Skitarri soldier. 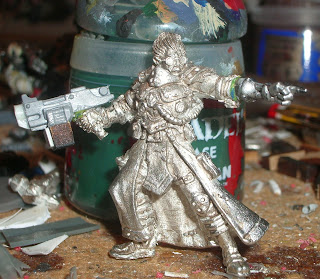 It's not a 40k army unless someone is pointing at something.

The next soldier was a Privateer Press model. He was doing a wobbly-fingers magic-casting gesture with his left hand, which was raised up alongside his head, like this:


Fine if you're a wizard, but a bit odd in the underhive. I removed his arm, replaced the hand with the one I'd taken off the guy above, and sculpted him a new arm in green stuff. The remains of his shoulder got a random bit of 40k "tech" to cover up the mess. 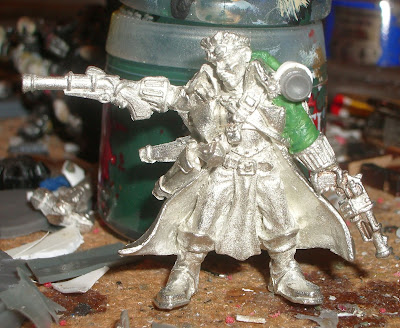 The third conversion was a bit more drastic.I found an old conversion that I did about 15 years ago, giving an Eldar scout (for some reason) a space marine plasma gun. With a new head (from a wood elf) and new arms (Imperial Guard), and quite a lot of green stuff, the model now looks like a mixture of a doctor and some kind of chemical cleanup team. Which is pretty much what I want! Her rather stern expression, coupled with the metal plate on one side of her face, suggests that she means business. 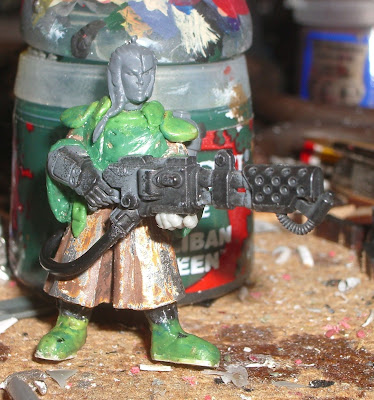 Anyway, I've not painted much, although I made this little cooking station out of a textured base, some off-cuts of MDF and an ogre kingdoms pot (thanks Other James for this bit - I knew it would come in useful somehow!).