Imagine that you are in charge of a boy band. There they are, bright-eyed and squeaky clean (except for the rugged one with designer stubble). Soon they will go on stage and sit on their stools. One will stick his finger in his ear and they will sing a ballad as sincere as it is forgettable. But what will they wear?

Obviously, you can't just put them on stage wearing any old thing. It would look weird. But you can't dress them all the same, because they'd look like cabin crew or part of a very unthreatening fascist movement. So you dress them similarly, but differently.

Stick with me here. One way or another I've ended up with quite a few models in long coats with odd bits of tech stuck to them. Some are GW, others Privateer. Some have goggles, others wavy hair. It occurred to me that it would be quite cool to make them into a Necromunda gang. 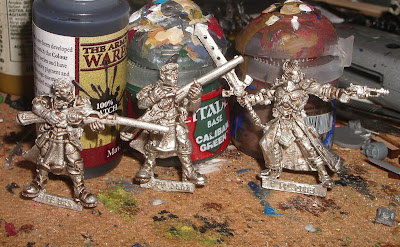 The goggles and coats suggest House Delaque. But to be honest I'd rather do a technology-based gang. So how about making them scientists (or at least people who dress like scientists) and using the rules for House Van Saar? Ok then, our guys are going to have white coats and lots of gadgets, which will be a change from the grimy, practical look of the Terror Bird Cavalry. There will have to be a few modifications, of course (I don't like that sword, for one thing). To make sure that they're something seperate, I'll avoid using Delaque and Adeptus Mechanicus models as much as possible, and give them a different colour scheme.

Also, why not include a few robots? They could work well as juves, because they start off pretty terribly in terms of stats, but rapidly advance - which could be represented by adding pieces to the models to reflect the skills (well, upgrades) that they've received from their makers. 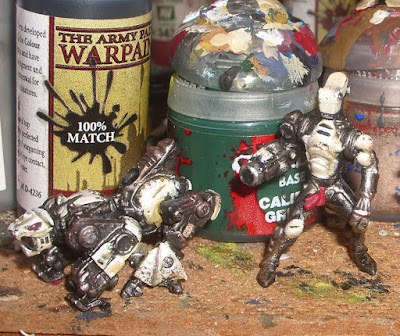 I've started on the robots. These were built largely out of Mantic Dreadball parts (the Ro-Tec Brutes to be precise) and I added Chaos and Eldar 40k parts. At the moment they're a bit on the crude side, but that's what I want. If I end up playing any games with them, they'll be refitted as appropriate. 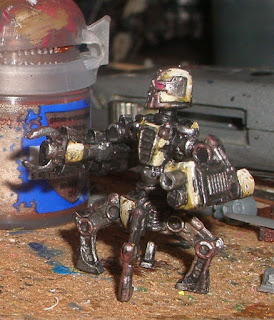 I think this idea has potential. I'll have to see what I can do with the human gangers now.
Posted by Toby at 09:28