The Path To Gory Glory

I thought it was time that I finished up the various Chaos models that have been lurking half-finished on my desk for months. So, here we go.

It is said that the road to Hell is paved with good intentions. If you're a chaos cultist, however, it's probably paved with bits of other cultists, who are just as disposable as you. The Imperium is crawling with criminals, lasgun nuts and crazies who think Horus should be emperor, and it only takes a small push to send these dupes rushing forward to soak up some bullets for the chaos gods. 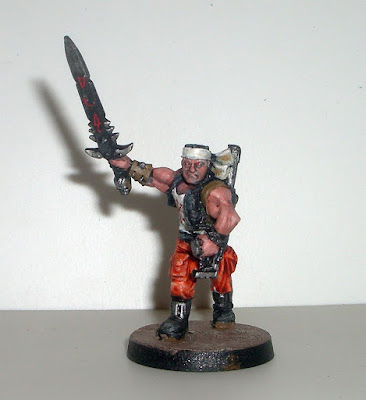 This guy was made out of a metal Catachan torso that I got in a job lot. For some reason, he was missing both legs and one arm. I added plastic Catachan legs and a sword arm from an old chaos marauder (they're the only models with muscles as silly and over-developed as the Catachans). Now he is leading his colleagues forward to glory (ie horrible death).

Many chaos marines are veterans of the Horus Heresy, or are renegades who have defected from the Imperium. After all, the Imperium is already halfway to being a hellhole, so you might as well go the whole hog and fly your spaceship into a literal hole to Hell. On occasion, the chaos powers themselves will conjure up a marine from scratch, and once in a very long while, a cultist might even survive long enough to ascend to the ranks of marinehood. 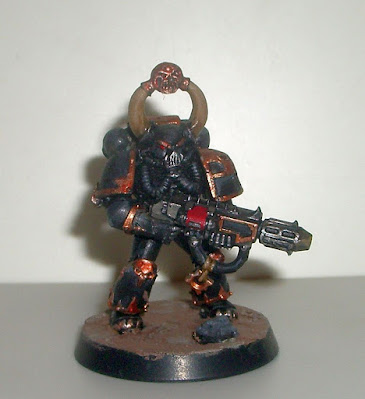 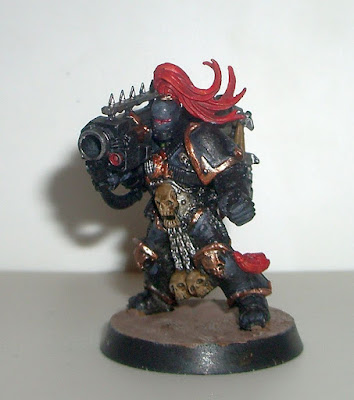 These two marines combine old parts with new arms. The chap with the meltagun has an ancient body (probably from before 2000) and arms from the newest set of marines. They go together surprisingly well. The missile launcher bloke was made from a mangled metal model of Kharn the Betrayer, again from around 2000, which was missing its head and both arms when I got it. I added a missile launcher and backpack from the new marine set. His head was from a fantasy chaos warrior, mainly because none of the heads with horns would fit, and I gave him an ork topknot as a plume to make his head more interesting. Interesting how models that are over 20 years old can still work well with new parts.

Most chaos marines honour the chaos gods equally (or just despise everyone). Some choose to devote themselves to a particular god, such as these plague marines of Nurgle. The rewards for doing so are great, and include rusted weaponry, broken armour and hideous blobby growths. Awesome! 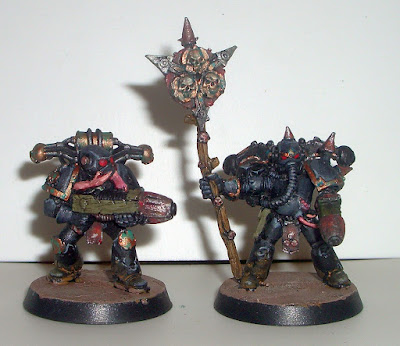 These are older plague marine models. The standard bearer and plasma gun man are from around 2000, and the little chap with the nurgling on his shoulder is even older: he appears in the blue catalogue from the 1990s. The tubes coming from plasma gun man's helmet had been hacked up, so I sculpted some unpleasant biological pipes instead. The standard bearer had a couple of rusty spikes added to his shoulder pad, to mimic the ones on his banner and helmet. 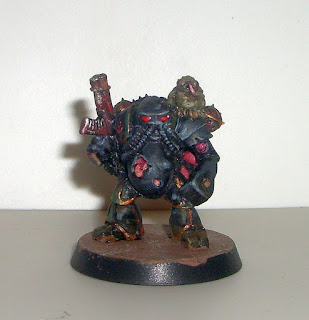 The really old marine wasn't converted, but I'd been saving him a suitably ancient backpack, which turned out to be very big and which attached at a weird angle that I didn't like. Instead, I gave him a leftover backpack from the old Dark Vengeance set, which is smaller and fits the model very well. He's especially dinky, and his two friends are noticeably smaller than the current batch of plague marines, but maybe Nurgle has favoured them with a delightful shrinking disease. That's the great thing about chaos - anything goes, and it usually goes very wrong.

And then, after many centuries of raising Hell and dodging spawndom, a chaos marine may rise to commanding his own squad - perhaps his own warband and a deeply unwholesome familiar. Best of all, such a warrior will receive a helmet worthy of his status. Lucky chap! 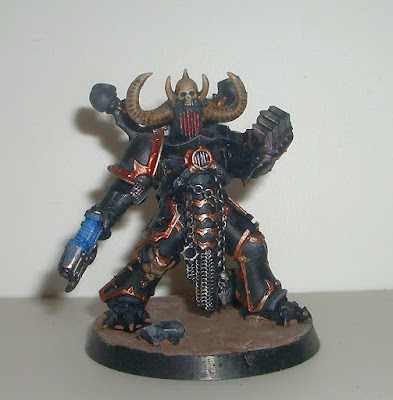 This is the last of the five champions based on Havoc bodies. He's huge, like the other ones in the group, and I'd probably field him as a terminator. This guy has arms from the new chaos marine sprues, a backpack that I've had lying around for ages, and a completely ridiculous helmet that once belonged to a fantasy chaos knight. I modelled him shaking his fist, for maximum arch-villainy. He'll be indestructible, provided that he never nods again.

Very cool bunch of chaos troops. I like how the bronze pops against the black. I also particularly like that helmet you gave the champion. Very menacing.


Thanks! It's not quite the Black Legion colour scheme. I was lucky to find that helmet while trawling through the bits box. Some of the fantasy chaos helmets have that right combination of sinister and ornate that works well on 40k marines.

What a great mix of different miniature lines. Truely chaotic!