Back to the Tau

Back to normal (pretty much) for this post, as I've decided to give the turnip project a rest for now and return to my sci-fi Tau. I bought a couple of battlesuits from Ebay: they were in a pretty gunked-up state, and needed quite a lot of work. The first of them has just taken off, and is flying over the desert landscape. Below him is the skeleton of some type of cattle, which he may or may not have zapped.

Apart from some repositioning of the legs, he's basically unconverted. I quite like the old battlesuits: they're old and low on details, and they don't make much physical sense, but they've got a certain robotty charm. 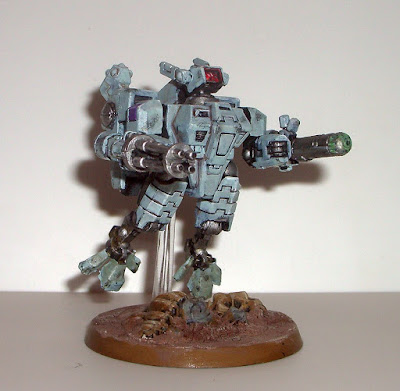 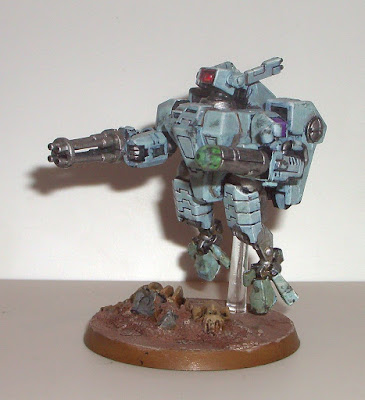 Next up, I finished off some Pathfinders that I've had lying around half-painted for ages. I really liked the big rail rifles that they can carry and, although it's not codex-legal as far as I know, I thought a squad of five would look cool.

There's not much to say about these except that two of them are older metal models, and that the newer plastic Pathfinders are about ten times better than the old Fire Warriors I was making earlier this year. The detailing is so much better. You can even figure out what's going on at the end of their legs! 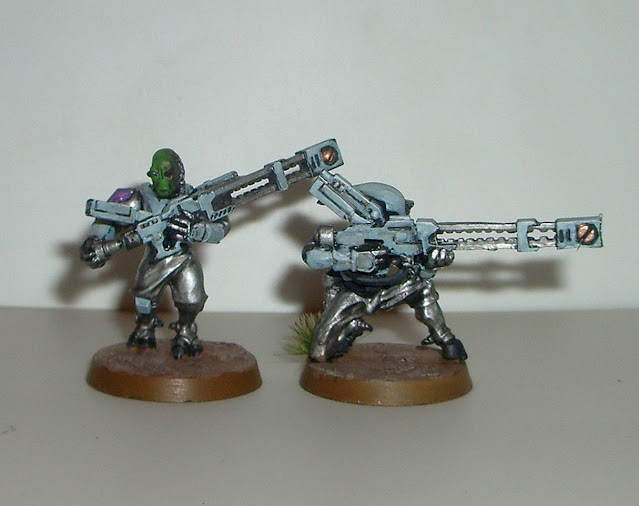 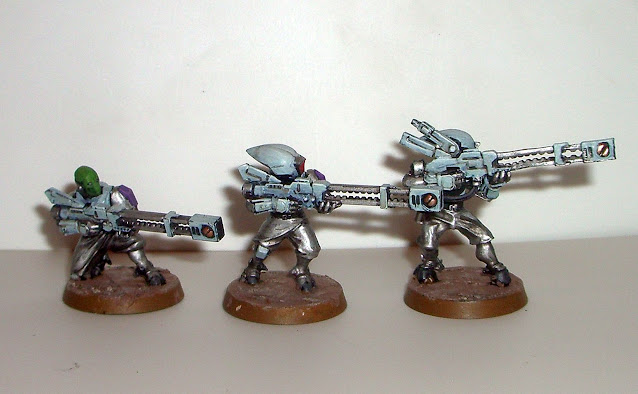 I love the posing on these guys, especially the bloke reloading his weapon. As I was making them, it occurred to me that the green Tau heads look a lot like the Treens from the old 1950s comic strip Dan Dare. Which, given the space-invader theme of the army, feels very appropriate: 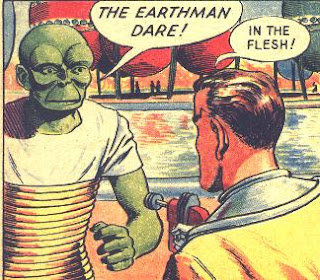 Haha, that's a nice reinterpretation, I really like how you are facing this retro project! :D

I really like the colors you picked. The light blue and metallics look really good with the splash of purple. I like the green heads a lot. I’m going to paint up some aliens soon, and I was also thinking of getting away from the traditional grey look of the “greys”.

Thanks - having green skin and blue/grey uniforms does let me cover both sorts of flying saucer aliens. I'm pleased that I didn't use a standard grey, as the pale blue tint makes it a bit more interesting and unworldly. The other good thing is that the outfits are fairly easy to paint, thanks to colour schemes and the way the Tau are sculpted. The purple was meant to be an interesting contrast without looking too bright, like red or bright blue.