A Tau Battlesuit Abducting A Famer

Time for the second batch of 1950s space invader Tau. First up is a battlesuit conversion. In true 1950s style, he's abducting a farmer for reasons too terrible to explain.

He's got pincers from an ork slaver, if I remember rightly. The wheelbarrow and shovel were from a dwarf kit and the farmer was made with Catachan legs and the upper body of the fleeing man (Johan seems to be his official name) from the plastic giant kit. The farmer isn't actually glued in place, so if for some weird reason I decided to turn him upside down, I could do. I'm not very happy with the barrel of the Tau's gun, which was meant to be glowing, but otherwise I like the guy. 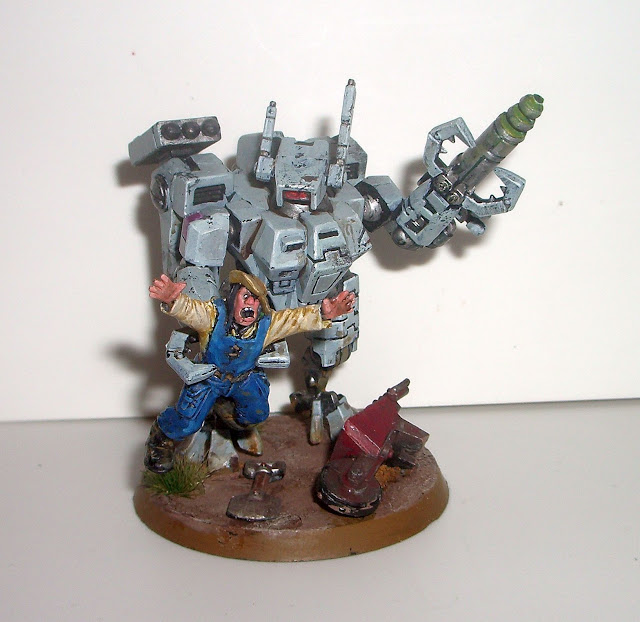 Then we've got five old metal stealth suits. I bought these absolutely ages ago. I really like the miniatures - more than the recent ones, in fact. A couple of them had some pretty awful mould lines that I couldn't really clean up, but they've come out well. Ready to infiltrate the earthlings!

Johann looks genuinely terrified that he's about to be probed!

These look great! I really love the conversion to snag a farmer. I'm also a fan of the original stealth suits. One day I'll snag a few and complete a Killteam. :)

Haha, so cool, I love it!
Oh my, I didn't even remember those metal minis! Lovely work!