So, last time I thought that I might continue my wood elf project, perhaps with a break to work on a huge siege engine. Predictably, I did neither of those things and made an enormous demon instead.

A while back, James F sent me some bits, including the body of an old metal Bloodthirster of Khorne. I didn't have all the pieces to make him, but I decided to use his body to produce something suitably mental. In terms of size and shape, he reminded me rather of the "cyberdemon" off the box art for Doom 2.

I built him a left arm out of an old tyranid arm and a plasma cannon. Hopefully, it looks as if the gun is somehow forming from his flesh. 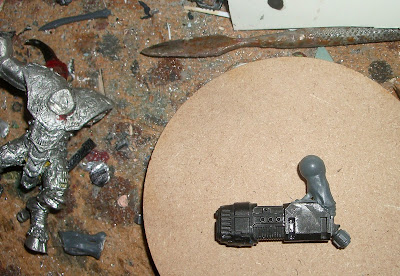 He already had a right arm, but no hand, so I used a suitably big and spindly hand from a Dark Eldar pain engine. I added some bits of plasticard to suggest that it was bionic and strapped to his arm.

His head came from an old demon prince bit that I'd mail ordered years ago. It is a really good head and looks suitably evil without being too cartoony. I pinned it on at a slight angle so he was looking in the direction that the gun was pointing. 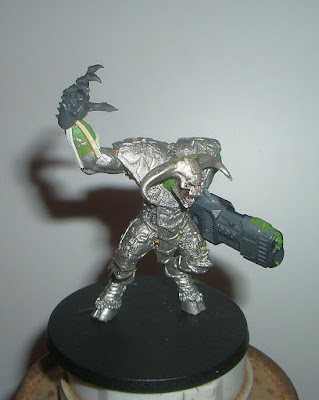 Then it was time for paint. I'd planned on giving him red skin but the original picture gives the cyberdemon pinkish-brown flesh, so I went with that. I used a red undercoat, which seems to give the flesh a slightly raw, unhealthy feel. 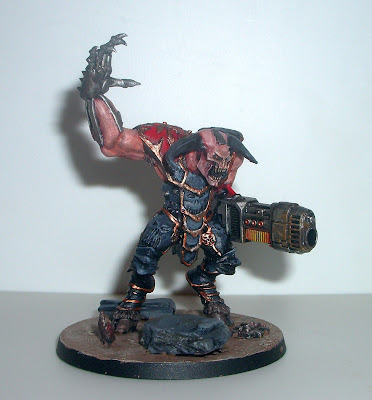 The back view is slightly less terrifying. If you ever wondered what the bottom of the abyss looks like, now you know.

It's odd really because I started this as a bit of a silly laugh, thinking that it might work as an extra obliterator for the chaos force. It's ended up as something I'm really pleased with. On balance, I think he would make a nice daemon prince. In the "bare-arsed snarling hellspawn" sense of "nice".

Toby, that is incredible work. I’ll have to have a dig around and see what other part made models I can find for you to work your magic on

Thanks James! I would never have made him and his demonic posterior if you hadn't sent me those spare bits!

Awesome conversion work on the Cyberdemon! It's a really effective combination of components that work really well together and the paint job is really fab too!

Thanks guys. I'm now wondering whether to do the fat missile launcher demon too. This inspired me to buy Doom 2 for £1 in a sale - given its age, it's not bad!

I believe it's a really interesting job. I particularly love the choice of the head, that's most likely one of my favourite bits ever. You built a scary monster here (both from the front and behind!)

Cheers Suber - the metal 40k demon prince was a pretty good model. I wish I had a whole one and not just the head!

Damn, what a great idea for a conversion! I thought about how a Doom cyber-demon could be done. Thanks for showing me!

No problem! Didn't you make something like this in 15mm scale?