As a change from all the Carnevale stuff, I painted a couple of science fiction guys I've had lying about for a while. This week, the trailer for the new film of Dune came out (I refuse to say "dropped", as I'm old), which reminded me that I had a few potentially deserty types in the heap of unpainted lead.

The first is an old Van Saar Necromunda model. I got this ages ago, minus its head and one arm. I gave it a female head from Statuesque Miniatures and a knife that looks as if it was made from bone (in Dune, the knives are made from the teeth of sandworms). After all the Carnevale models, her head looks huge compared to her body - it's actually pretty standard for 28mm. She got a black suit, with heavy weathering on the lower legs. The eyes were washed blue to reflect the effect of eating space spice. 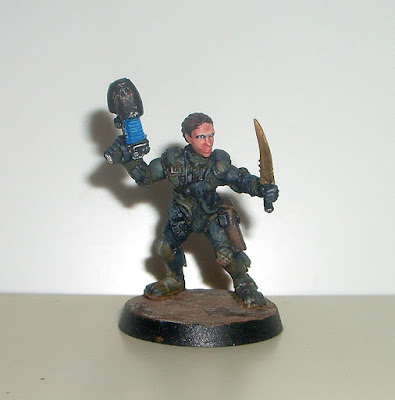 The second fighter was an old Privateer Press Khardor marksman. I've had this model for ages: an identical miniature from the same set was in my first Necromunda gang, the Terror Bird Cavalry. His long coat looks like the sort of loose thing that might help with desert camouflage, and the bits of his outfit that can be seen have a suitably complex look. While everything in Dune looks a bit retro to my mind, I gave him a glowing bit on his rifle to show that he's a science fiction person, and to draw the eye. 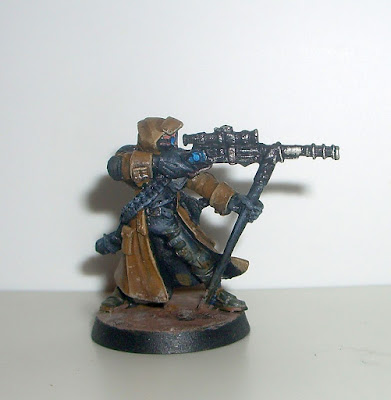 These are very much test models. I've got some more old Van Saars coming in from ebay, so I reckon I'll paint them in a similar fashion.

Good work on these. I like the gritty look on them. They'll fit right in across many different settings.

Thanks - the weathering helps a lot, I think. Some of the old Necromunda painting was rather garish, but I think they look better with a more toned-down style.