"They Laughed At My Camel"

I'm still looking through my boxes of unpainted miniatures, many of which I picked up at events purely because I thought they looked cool. I found a camel among them, which I got at an event in Newbury for reasons that I've long forgotten. My main memory is the guys I was with saying "Why the hell would you want that?"

I also happened to pick up an old and broken Necromunda juve in a sale of various old models on ebay. I like some of the old juve sculpts: they have some good poses and expressions. This guy, who is from House Cawdor, was missing his pistol and most of his left hand. It occurred to me that he looked rather as though he was pulling hard on something instead of bracing himself against the recoil of his vanished gun.

So, I put him together with the camel. I drilled a hole in the juve's hands and the camel's harness and connected them with some string. Then I used green stuff to repair the juve's hands, so he would be clutching the rope with both hands, trying to get the camel to move. In my first attempt, the camel didn't quite look stubborn enough, so I cut its neck and bent it back slightly. 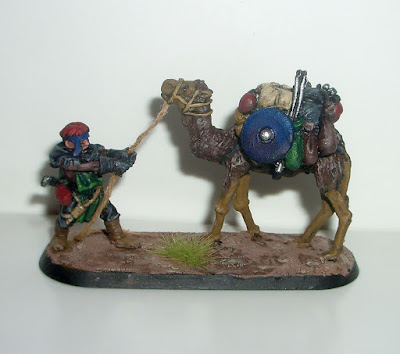 I doubt he'd have any function in a game, but he could make for a reasonable objective. 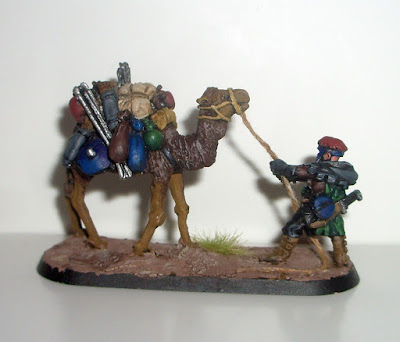 I've got a few other models that would work as desert-dwellers and other folks from a supply caravan. I might have a go at making a group of caravaneers.
Posted by Toby at 12:44

Email ThisBlogThis!Share to TwitterShare to FacebookShare to Pinterest
Labels: Animals, Goodness only knows

It's a really great addition to your collection and has a million uses!

Damn, they really look like they were sculpted for each other, Toby. Brilliant!

This looks like a match made in heaven, the pose of the Juve is perfect for this. A wonderful conversion!

Thanks - it was harder than I expected but it turned out ok!