The Wraith of God / The Wrath of Odd

After last week's post on the new Sisters of Battle book, I thought that I'd start work on some of the creatures that I'll be using in place of the acro-flagellant models. While I like the armoured sisters a lot, I'm less keen on the half-naked maniacs who seem to make up the majority of the Ecclesiarchy troops. I would have expected there to be more angry monks, for one thing.

For another, I've mentioned in the past that there are only a certain number of visual concepts to go around. The heavily-muscled, bionically-adapted gladiator/slave/executioner look is shared by a few factions, including the Dark Eldar and Adeptus Mechanicus. I think it would be cooler to have something entirely different.

The Sisters have a medieval, religious feel, and it makes sense (I'm using "sense" pretty broadly here) for their flying troops to have an angelic feel. Why not go one step further and have something like a horde of pissed-off angels? Something like this:

[Incidentally, I'll go on record as saying this this is one of the best moments of cinema I've ever seen. The technical skill in Raiders of the Lost Ark is amazing, whether it's in matte paintings, miniatures - or melting heads. The moment where the angel's face changes, and the score goes crazy, and the audience realises that these guys really are very screwed...]

These things could be the spirits of Sisters who failed in some way and were condemned to right their wrongs in the psychic afterlife, or else just fancied another go at trashing things. Certainly the statline of the arco-flagellants would work for an angry ghost, with their high movement, little in the way of toughness, but an invulnerable save from being ethereal.

I've used the fantastic Myrmourn Banshees from Age of Sigmar. Despite the weird name, they are great models and ingeniously designed. What's interesting about the kits is how much is actually "missing" and how insubstantial they look as a result, without losing their overall shape. The faces are clearly skulls, and the robes/skirts and armoured chestplates draw a visual link to the sisters models. 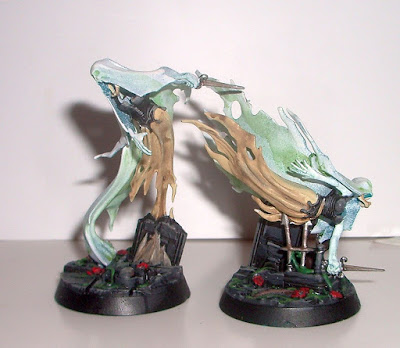 The models come with really nice sculpted bases, which again suit the feel and colours of my army. I trimmed an hourglass off one model, as it seemed unnecessary, but otherwise they're as they came out of the box. For anyone who doesn't like the bases, there's a post about rebasing these models by Rob Hawkins, here: HERE. 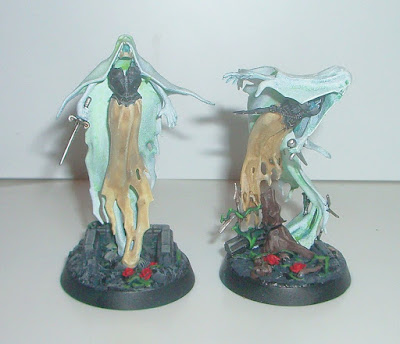 Of course, they could do with some protection while they're getting to the front line. Hmm, perhaps a suitable-decorated Rhino...

Thanks - I'm doing the second 4 now, but I've converted one to have a more human face, like the angels in Raiders before they get violent. It's proving harder than I thought it would be!

Very nice, Toby! They catch that feeling from one of my favourite movie scenes quite well!

They're fantastic, you captured this ethereal look really well while the chest plate ties them nicely to the rest of your army.