A while ago, I painted up some old Sedition Wars models to function as soldiers for the cyberpunk game Hardwired. In Hardwired, successively tougher waves of baddies swarm onto the streets as the game goes on, and it made sense to make some larger troopers to support the rather scrawny little Sedition Wars men.

I bought a sprue of plastic Algoryn soldiers from Warlord Games' Beyond The Gates Of Antares. They're not the greatest of sculpts, but they are big and bulky, and have the sort of smooth, shaped armour that fits both the Sedition men and the cyberpunk look in general. As per their smaller comrades, I sprayed them white and applied Black Templar contrast paint.

It's not terribly subtle and it won't win any prizes, but it looks fine, and it works. Here's one of the new heavies next to a Seditioner. 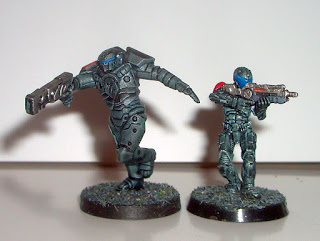 I've had some other Algoryn metal models lying around for about a year, which I purchased in a sale. I took the chance to paint them up with the contrast paint. These are the bodyguards for an officer, who I'd use as a corporate or alien commander. They're clearly not human, and I painted them green, which does make them look slightly like old Doctor Who villains, or unusually fascist sprouts. 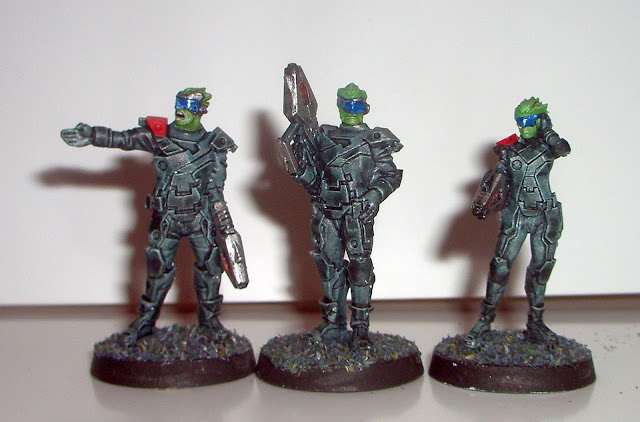 I really like the poses, especially the guard checking her earpiece. And here's the boss: 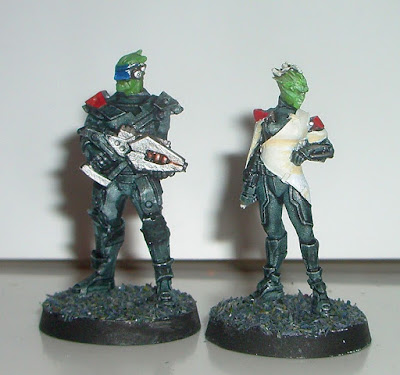 Anyway, I will leave you with a bonus photo of the Anata No Warehouse, a Japanese arcade modelled on the old Kowloon Walled City. This is how I imagine the game would look! 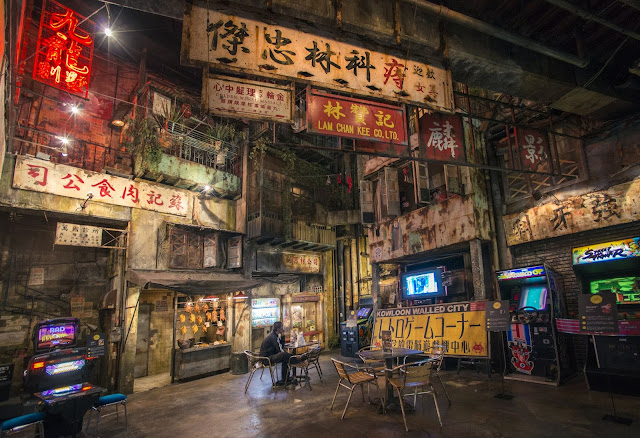 Nice work on the cyberpunk types!

I must admit that the Contrast Paints appear to do rather well at getting figures done to a decent standard quickly! I may have to pick up a few to experiment with.

I'm looking forward to your next Hardwired battle report!

While not my favourite sculpts (they're a bit clunky), they indeed do mix up nicely with your SW sculpts. With the paintjob you did on the ones without helmets, the models even look a bit like characters from Mass Effect, which I think is a very good thing.
I haven't dabbled in the use of Contrast paints myself yet but I've seen very good results with them already and I think your models look quite decent. Especially as they probably took almost no time to paint up.

Oh those are nice. Ya the ones pointing, and checking the ear piece make for perfect elites ready to boss mooks around.

Thanks everyone. I agree that they're not brilliant sculpts but they'll certainly do the trick (and they were cheap!). I hadn't thought of the Mass Effect connection, but I definitely see it now.

I'm not sure that I'd recommend contrast paints for flat surfaces or for models that you really want to do well (I only did the armour on those guys with contrast). And I'm not sure that contrast black would look right next to normal black paint. But it certainly has its uses.