Skullvane Manse (Well, Some Of It!)

Skullvane Manse was a big terrain kit that came out in 2013 or so, a few years after the Empire Fortified Manor kit. In terms of design, it's somewhere between the earlier kits, with their Grimm's Tales/medieval look, and the later kits, which are a big pile of enormous skulls. Quite what use it would be on a Warhammer battlefield, I don't know, as it's really tall and I doubt units could really interact with it. 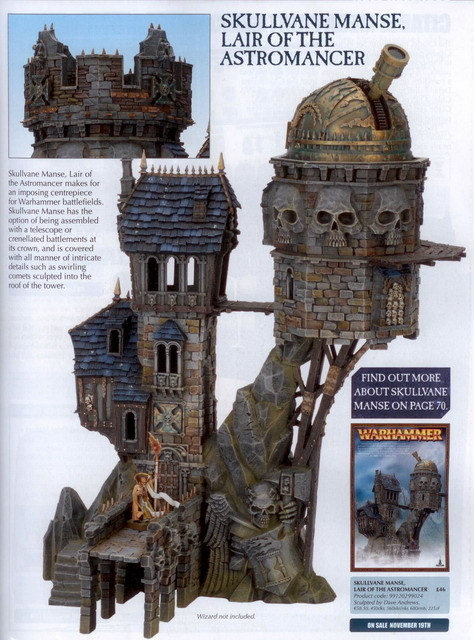 There's some cool stuff going on here, and some nice design - and it's all horribly undercut by those awful cheesy skulls. OK, a huge castle called Skullvane Manse (what is a manse, anyhow?) is probably not going to look like a 2-bed flat in Chelsea (and would probably cost a quarter of the price), but still, it looks silly.

Anyhow, ages ago I bought part of this kit for £20 on ebay. The bit I got was the main body of the model, minus the octagonal tower and the bridge at the bottom. I had a go at finishing it off a few years back, but it was a bit half-hearted, and this Christmas I tried to make it look properly good. I acquired a huge amount of coffee stirrers and, crazed on caffeine, got to work with sharp implements.

First up was making a ramp to the upper door, along with props to hold it up convincingly. Then I used green stuff to sculpt some bricks to fill in gaps around the stairs. After that, I built a wonky bridge, a handrail (which, in retrospect, looks a bit too solid) and a platform at the end. All of this was done with coffee stirrers. I made some metal strips to hold it together out of blister pack plastic, a trick which I stole off the Gardens of Hecate blog. 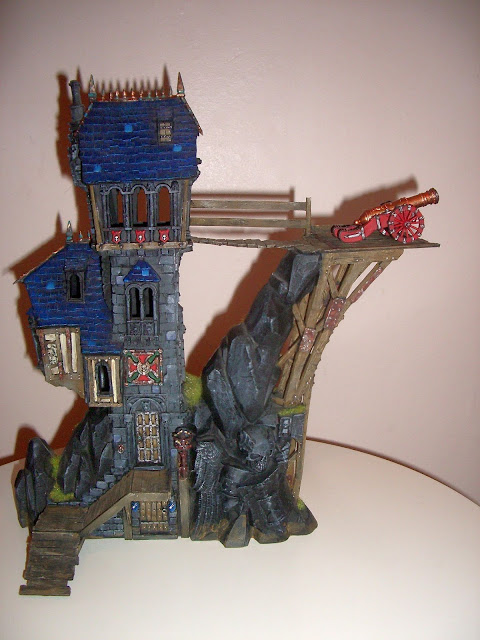 It's decently sculpted, but the casting feels a little bit primitive, and it's clearly made to take a certain amount of battering.

When converting a model, there is often a sense of movement to the miniature, which leads the eye of the observer from one point to another. In this case, the eye naturally follows the ramp up to the door, along the curve of the rocks sticking out from the side of the model and towards whatever's on top of the wooden supports. Basically, the platform just didn't look sufficiently interesting.

So, I added a cannon (thanks James F), and painted it in fairly bright colours to make it stand out. The cannon can be removed, and I'm planning to use the platform as a landing point for big monsters and flying machines. But for now the cannon - especially the shape of the gun carriage and the angle of the barrel - works for the platform. 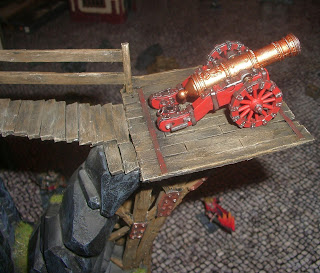 And here's a view from the other side. I didn't fancy removing the skull, so I tried to minimise it with grass, to suggest that it was overgrown. 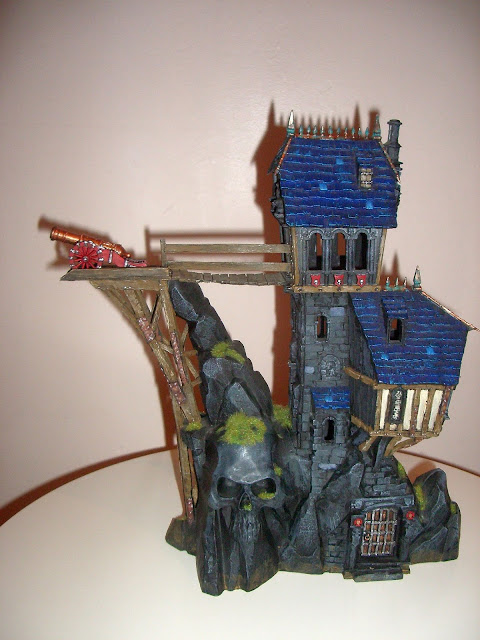 It certainly towers over the landscape! 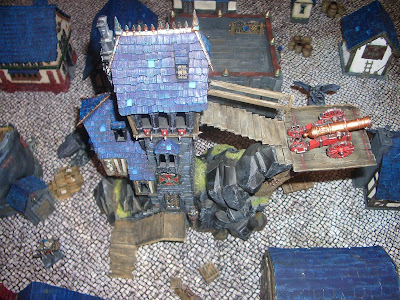 Toby that is a simple but fantastic conversion. Careful the dragon doesnt blow it over. I really like the idea of its use as an artillery parapet.

Good call on removing the ugly tower, the construction as a whole looks way better because of it; a great conversion!
I'm not sure why GW has such a big fascination with skulls. In most cases they're completely unnecessary and even make me rethink of buying a particular model.

Thanks guys. I think it works better without the tower, which doesn't add much to the model. The flat platform makes it much more useable, too.

I suspect the thing about skulls is that it's just a quick and lazy way to say that the setting is dark and sinister. Fine, but it does start to look ridiculous when they're growing out of monster's kneecaps like that Khorne thing in AoS. Actually, I've got this theory that skulls grow in the ground in 40k, like some sort of bio-engineered turnip...

I wouldn't be surprised, ...
The skulls have been a thing they introduced a long time ago, mostly as ornaments on miniatures, probably to keep the gothic theme going. Back then it was balanced by a very colourful approach which made it all look very playful. These days it seems to have grown to ridiculous proportions.