Here's the finished model of Warlord Games' Prince Rupert, leader of the Royalist cavalry from the English Civil War. I painted him very much as I felt and didn't attempt any historical accuracy. 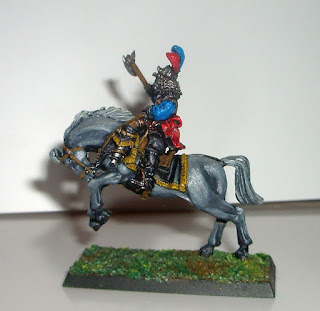 He's assembled as per the standard model, although I replaced his small (and realistic) cavalry hammer with a slightly larger Warhammer axe for drama. The model also came with Prince Rupert's dog, who I haven't added as I wouldn't have had room on the base. 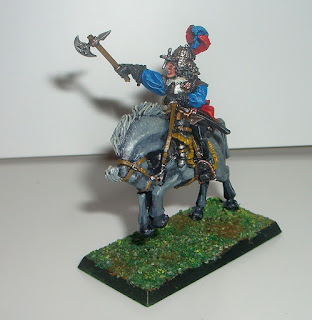 It's a very good sculpt, and I particularly like the leaping horse. I'd like to say that he was a pleasure to paint, but frankly the model was terrible for paint chipping off. That said, I'm pleased with the painting, especially of his horse.

Email ThisBlogThis!Share to TwitterShare to FacebookShare to Pinterest
Labels: Animals, The Real World

A great little sculpt and with me being foremost a fantasy player, I feel like you only improved the model with the weapon swap.
As for the paint chipping off, maybe it would've been better to wash him with some soap before you started painting him. This helped me in the past when I had a similar problem with a model.

He's such a dashing little mini. ;)