Anyway, back to the painting.

This has been a slightly quiet time for painting, as I've been doing a lot of writing, but I did manage to repaint four old metal bloodletters, which I probably bought when I was about 13. They're the first incarnation of bloodletters: incarnations 2 and 3 were big muscley creatures (3 looked somewhat like beastmen, and 2 just looked awful). Incarnation 4 are the spindly plastic models we have now, somewhat like a cross between a medieval devil and the Alien.

Clearly these are old models, and they're small and comparatively lacking in detail. The strange poses of old metal rather help them, I think, in that they look twisted and vicious rather than just angry and strong. I expected them to look dreadful against a modern bloodletter, but actually, they're fine.

Here are the first two, with their younger plastic friend. 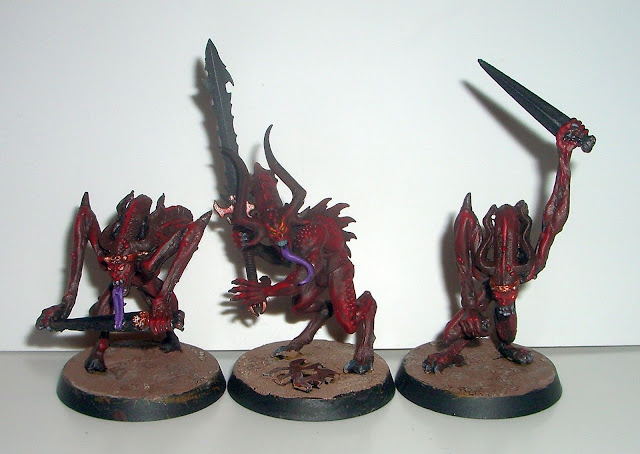 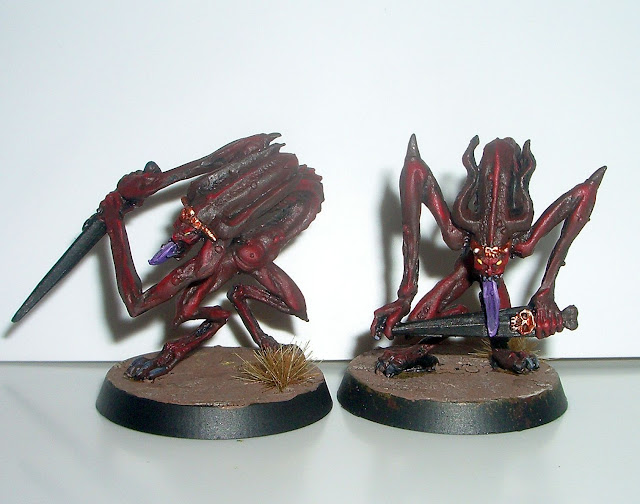 And I also painted a random model from the Reaper Bones Black line. A long time ago, I bought a load of the white Bones models on Kickstarter. I came to the conclusion that, while they were essentially fine, they lacked crisp detail and had a lot of awful mold lines. Fine for big monsters, less good for characters and smaller models.

I bought one of the newer Bones Black models to see if the range had improved. I'm pleased to say that it has. This model is unconverted, and all I had to so was to undercoat it and cut off a few mold lines. Some of the detail around the leg was a big vague, but I think it's pretty reasonable overall. I could make out what everything was supposed to be, and the face, which has a nicely-sculpted smile, came out well. I've no idea what she's meant to be: I assume from her strange outfit that she's some sort of wizard or druid. 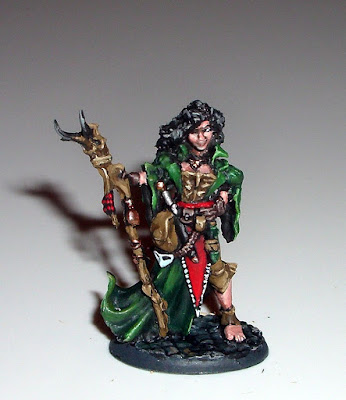 Lovely work on the assorted goodies!

The bloodletters have turned out really nicely and it's good to see that the Reaper Bones figure isn't all bendy but takes paint really well too!

Thanks - the bloodletters turned out better than I expected. Some of those old models still work well. And I might go back to Reaper's stuff. For a test model it all worked well!

I always liked these old Bloodletters, they look more like the kind of demons you see on medieval paintings and sketches.
Lovely work on all of them!
If you hadn't pointed out I couldn't have guessed this was a Reaper Bones model, a big improvement over the white ones. Is it easier to remove mouldlines on the Black Bones too, or hasn't this really improved?