And so we come to the wizard and his apprentice of the skaven warband.

For the apprentice, I used an old metal plague monk model. He's got a staff and a robe, but they're rather mediocre, and he's notably smaller than the model I decided to use as the wizard. That seems like ideal apprentice territory, although the relationship between this chap and his boss is probably more like Igor and Victor Frankenstein than Robin and Batman. Which might be for the best.

When I finished the model, I felt that he was a bit drab and brown, so I gave him a necklace made out of magic cheese warpstone, and painted a glowing effect around his chest.


The wizard was a more complex task. I felt that, as the leader, he needed a more impressive base that would raise him above the common mob (or swarm, or pack, or whatever rats have). I took two of the Renedra sculpted bases that I'd been using, cut the front third off one of them, and used clay and plasticard to raise it above the level of the other base, leaving a kind of step at the front. I added a rat from the Abomination kit and made a sewer outlet pipe from a bit of old vehicle kit. 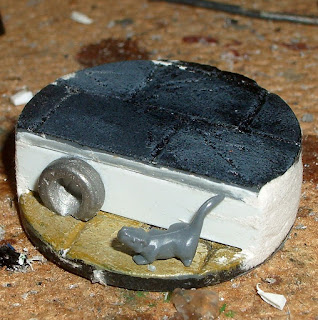 Then I painted the wizard. For this guy, I used an old metal character model called Ikit Claw. Ikit is a warlord of Clan Skyre, who focus on technology and war machines. As such, Ikit is a mad scientist, and like many evil mad scientists, he's blasted bits off his body and replaced them with machinery. He's had to rebuilt part of his snout, and he also has a huge bionic arm. It's fortunate that his parents didn't name him Ikit Leg, really.

The original Ikit Claw model came with a great big backpack and banner pole. I didn't get this in the ebay purchase that I made, but I don't think banners really work in Frostgrave/Mordheim anyway. I replaced it with a little wheel and crank handle that Ikit can yank when he needs to, er, turn his metal bits on.

Once again, I went for a glowing effect on the magic cheese warpstone. It's hard not to let skaven become rather drab and brown, and the green sets the models off nicely. He's quite a chunky model, and it was difficult to paint the metal parts in a way that made it clear what they were supposed to do. 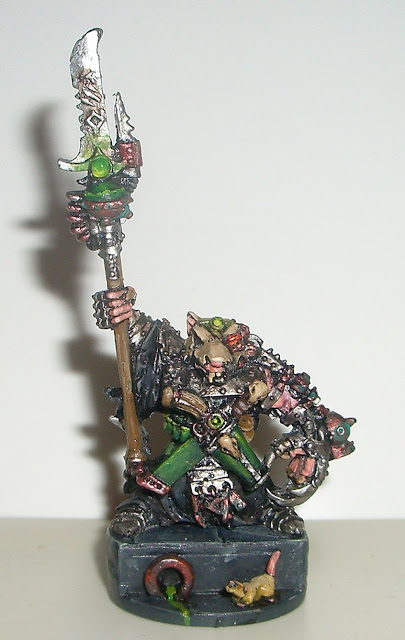 Here's a rear view, showing the handle in his back. How he reaches it is anyone's guess. 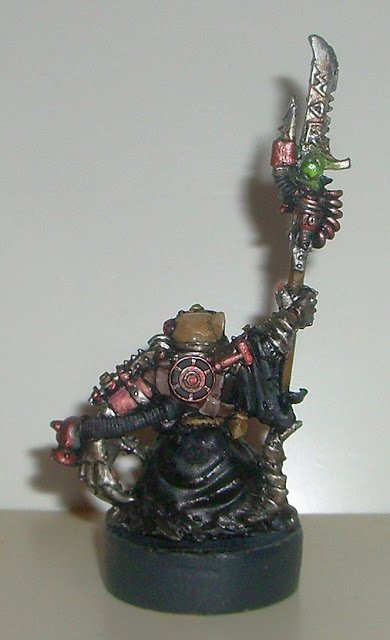 So that's the core of the warband finished. I want to make some more general purpose rodents, some giant rats, and a pair of stormvermin to serve as knights or men at arms. It's a great time to be a huge talking rat!
Posted by Toby at 09:02