One Witchfinder And His Dog

I have a big box of Reaper Bones models lying around that I got from backing a Kickstarter. Looking back, it was probably a mistake: a lot of the models don't do all that much for me, and the quality of the moulds often leaves something to be desired.

One of the models was a gravedigger. Here's what he looks like when painted by someone competent (ie not me):


I liked the basic model, especially the sweep of his coat and his grim expression. I was less keen on his little booties, which came out twisted on the model I got, and his lantern with the rather daft skull effect. So I made some amendments: 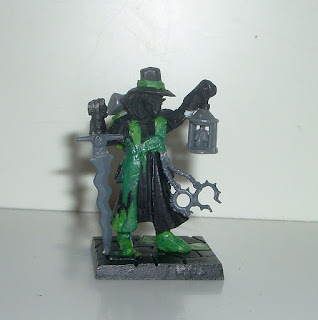 As you can see, I've replaced his shovel with an Empire sword, given him a new lantern (from some dwarf miners) and added a pair of manacles off a Khorne Bloodsomething-or-other. I bulked out his coat and hat with green stuff and sculpted him a a backpack (which you can't see), a pistol sticking out of his coat and a pair of new feet. The feet were made by cutting off the legs that he came with and building up from a wire armature pushed through his base. The base was from Mantic.


I've also given him a dog. The dog is Bill Sykes' dog from Twisted, a steampunk game. Bill Sykes was the villain from Oliver Twist, and appears to have fitted his dog with a metal jaw and some weird cannister on its back Maybe it's a jetpack. 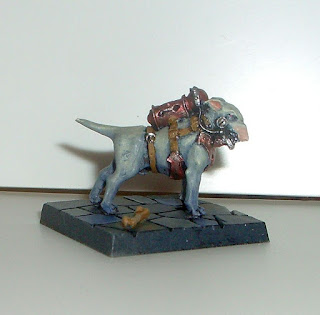 I'll be using the dog in my dwarf Frostgrave warband, which means that I've finally got it (nearly) finished!
Posted by Toby at 12:08