More dwarves for Frostgrave this week. I'm coming to the conclusion that the alleged lightbox has no function at all.

First up, an adventurer from the old days. He's from before the Red Period in the mid-90s, where GW inexplicably tried to paint everything bright red, and maybe even be (confusingly) from the red catalogue that came before that. Anyway, I suspect he came out around the same time as the thief from last week's post and, like the thief, he's an excellent sculpt full of character. 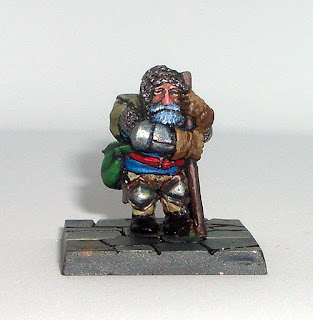 The second model is full-on Red Period. He's a Longbeard, which is an old, elite dwarf. He's got the cartoony, stumpy look that came in with the Dwarf army book, together with dumpy legs and huge feet. How the hell he runs is anyone's guess. But I like the model despite that. The way that he's basically a beard with a sword amuses me. 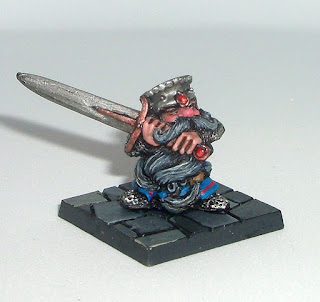 The next plan is to paint a couple of marksmen and a wizard for the crew. And then it's on to the undead...

Even though I mostly detest the red era I do try and incorporate one little tidbit from that time, adding a touch of red to every mini. it really does make a difference....I think it does anyway :)

Best not to think about the anatomical effectiveness of the GW dwarves...that way madness lies.

Strangely enough I think their worst sculpting comes from that time. They made some very odd stylistic decisions back then.

You're right: best not to consider it too much, especially since I've got a load more to do! Thanks on the painting. I really enjoyed doing these guys.