People from a Hammer film

A very long time ago, my friend Owen gave me a very heavy box containing a load of miniatures. In the box was a plastic bag full of odd little villagers. They were obviously pretty old, and each model had a job title written on the metal tab.

I did a bit of internet research and discovered that they are GW figures for Warhammer Fantasy Roleplay from 1985. No wonder they look a bit wonky. Actually, they're well-sculpted in terms of conveying the characters that they're meant to be, and some of them are impressively detailed. The thing is, they're very old-fashioned and the overall proportions leave a bit to be desired.

Anyway, I painted a few of them. I think the differences in scale can be put down to inbreeding.

Here is a witch (labelled "witch" on the tab) and an old woman (rather unkindly labelled "hag"). 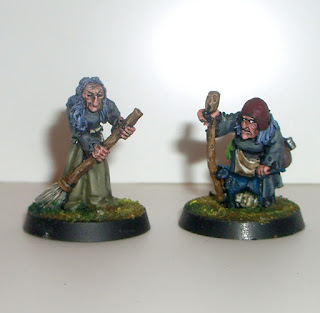 They're not really bad models - the detailing is pretty decent. Here are (from left to right) a druid (who looks like a drunken monk to me), a herdman (who looks like the naive and weirdly wholesome young hero of a bad fantasy novel) and a poacher. 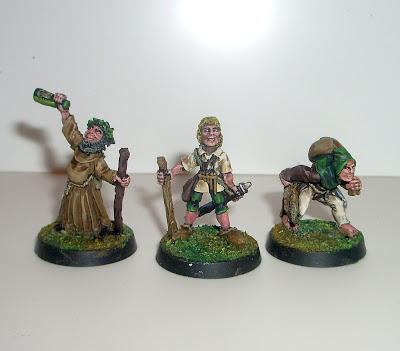 I also made a village pond. The village pond is a vital part of medieval life, supplying the visitors with "drinking" water, mud and a place to meet the locals whilst drowning suspected witches. This pond was a simple resin cast made by Magnetic Displays, which I picked up for £3 at a show. I added some grass and a couple of ducks from the Warlord farm animals set. Delightful.


And now for something slightly different. A while ago, I got a couple of Avatars of War miniatures in a sale. One of them was a vampire, who I painted up this weekend. She's a very good model, and in terms of style completely different to the villagers. Getting a decent picture of her was really difficult, but here she is. 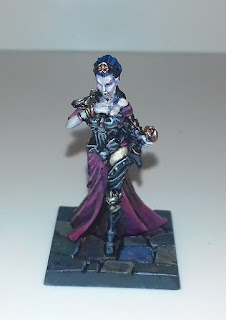 If you really don't like the sculpts, I'd gladly take them all! Today's miniatures lack the character of the old GW lines (IMHO). You did a great job painting them, give them the love they deserve. :)

Sorry, I'm hanging onto them - they're too much fun to paint! I agree about modern sculpts: they gain a lot by not having to look tough or rank up properly. They did make some entertaining models back then!

Cracking work on the paintjobs!

I'm loving the pond too, especially with the ducks which just make it perfect!

They've got a certain charm! I don't know how many ducks you get in 40k (grimduck?) but maybe an aquatic ork is wearing them on his head as camouflage! I've still got a ton of animals to paint - goodness knows why I bought so many...

The paint job on the vampire is excellent Tobes. Good work!

I like the villagers too. Very characterful. Kind of like Dad's Army if it was set in Studham.

Thanks - to quote Steve Coogan, she is truly diabolical!