"The Jabberwock, with eyes of flame..."

This year, I've been trying to buy a few less models by tidying up some of the more battered conversions and paint-jobs I did a while ago. A long time back, I made a small force of Grey Knights based on Alice in Wonderland (it seemed like a good idea at the time), which included a Jabberwock converted from the wreckage of a Chaos Defiler.

There is quite a lot of description of the Jabberwock in Alice, but most of the words aren't in English, which doesn't help. However, there is this crazy picture by the original artist, Sir John Tenniel:

I went back over my own version, improved some of the painting and made it much more rusty. The head was built out of two leftover Tau hatches, and the wings came from a Dark Eldar skimmer. I seem to have decided against the waistcoat, though. 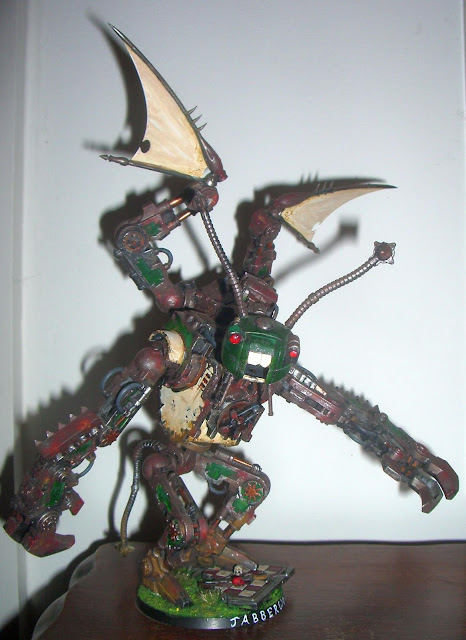 The base is a bit hard to make out, but he's partly standing on a chessboard with a red and white skull, to represent the red and white chessmen in the book (which I imagine he devours). 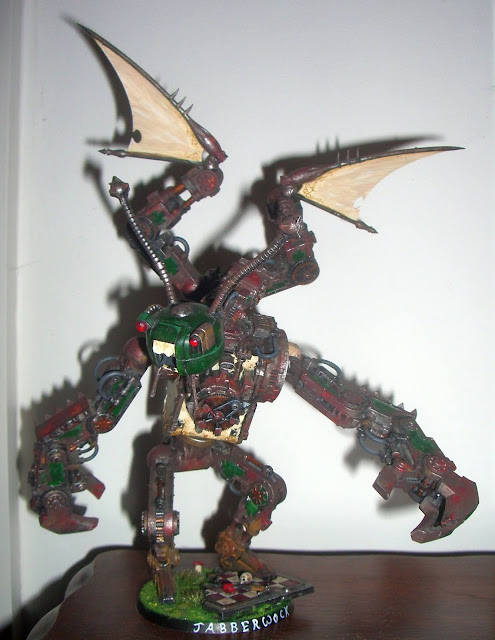 So, er, yeah. I do feel that something's slightly missing on him, but I'm not sure what. Any thoughts appreciated!

Email ThisBlogThis!Share to TwitterShare to FacebookShare to Pinterest
Labels: Alice

Something missing?? Really? I think it's a fantastic, inspired piece!
Not only you reimagined the creature, you gave it its own personality, I do love this, I may have to steal some ideas!
Maybe the thing you miss is a bigger tail, for a visual compensation of volumes and so. But that's just a thought, I really thing you did an outstanding job :)

Thanks for the comments, guys! I think I'll leave it for now. It might benefit from a bigger tail, but it works well enough. Feel free to steal any ideas!