After the hugeness of the Tzeentch dreadnought, time for some smaller models. The new version of Kill Team is coming out, which made me want to make some more ork commandos.

The guy with the big shoota is an old plastic model, put together as usual except with a different head (I think they're from Spellcrow). I added a bundle of large knives to his backpack, just in case he runs out of ammo. All ork commandos have a lot of large knives, for dealing with sentries and picking their tusks. 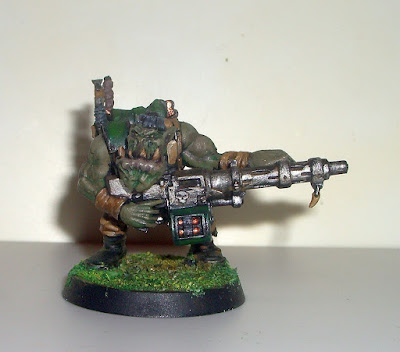 The guy with the bombs is the team's inevitable explosives "expert" (by which I mean "enthusiast"). He has a bomb-throwing arm that I got off ebay and a bag of explosives from the ork boyz set. His basic body is exactly the same as the gunner's. I added a head from the ork boyz set and sculpted a little woolly hat, which has come out okay, but not brilliantly. The head I used was missing an eye: perhaps this chap's enthusiasm for blowing things up lost him his other eye. 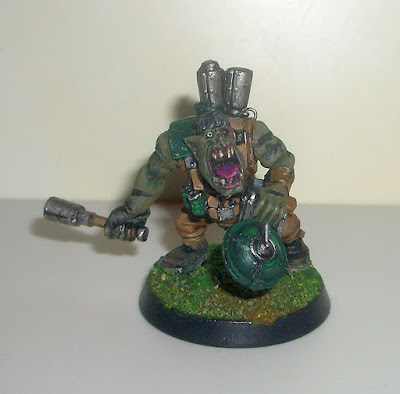 The last chap is a conversion that I've made before, and which I'm surprised never to have seen anyone else do. The curve of the gun-supporting hand is perfect to fit an ork's chin, and their slightly dim expressions really suit a look of chin-rubbing "deep" thought. The map was made from a gun-holding arm with a piece of plasticard cut to fit and green stuff added to make folds (and hide the bad bits). 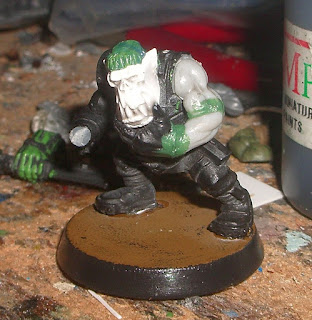 As you can see, on this side, the map is fairly complex. 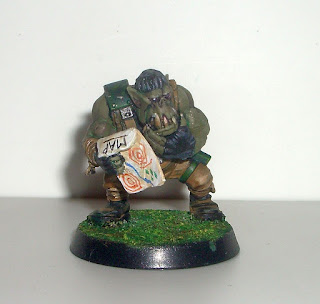 Less so on this side. 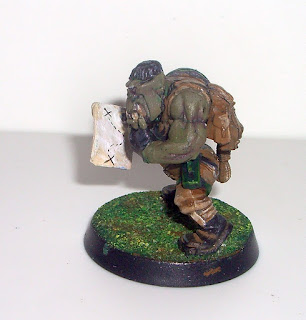 I think I'd have an entire army of commando orks if I could. There are still some others that I've yet to make - a bloke with a flamethrower and a heavy weapons guy with a PIAT gun - which will take the unit near to 20. And I've got vague thoughts of one day making them an armoured car...

Very nice work, Toby! The one with the map is my favourite. :)

Nice work, the map weilder is particularly good. It's a shame he is holding the map the right way up though!!!

Damn, he really ought to have had the map the wrong way up! At least he's looking at the wrong side!

Nice orks! I like seeing your conversions. It’s nice to see converting with the sea of sameness as people get the new set.