Funny how things creep up on you sometimes. Like twenty Kroot. I tidied up a few more of these guys, and painted five that I've had knocking around undercoated for years, and suddenly I had a massive horde of them. It's hard to get a decent picture of them all at once, but here is the whole squad/unit/flock, migrating across the desk.

Kroot are quite easy to paint, since they're almost naked and largely green, so you can just use a basecoat, a wash, and a few highlights. I remember Duncan Two-Coats on the Warhammer site saying that you were best off doing the large messy parts of a model first, and then tidying up, and that certainly worked on the Kroot.

Unfortunately, because they all look rather similar, I'm not sure which ones painted when! So, here are some of the most converted ones. The first three had their legs cut to be crouching down. This was rather fiddly, and ran the risk of losing all the little bits of leg. I particularly like the chap looking at the ground, who is probably examining the tracks of an enemy that he's pursuing.

These ones are all being dynamic. The one on the far-right isn't actually converted, but the arrangement of arm and legs makes him look like a very angry space parrot indeed. The guy in the middle just had his leg cut at the knee and pulled back a little, for a running effect. The chap on the left is protecting himself with a big metal shield. I've no idea where the shield came from, but it's a small nod to the spindly aliens in the film District Nine, one of whom uses a shield towards the end. 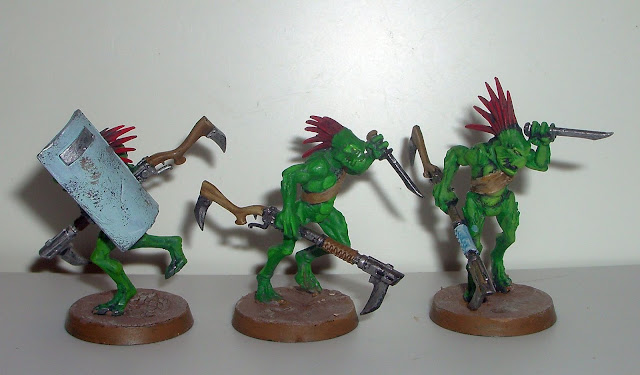 I'm not sure where these guys fit in the with 1950s theme, except that they're generic space monsters, but they're quite cool miniatures for their age. They'd work well as the natives of some steampunk Venus, unreasonably taking exception to be invaded by random humans.

Impressive conversions! I never would have known there weren’t crouching kroot if you didn’t point it out. The tracker is my favorite! Great job getting so many completed! It’s inspiring!

Cheers! It's mainly a matter of cutting the legs at the joints and repositioning them, then using green stuff and files to make it look about right. It's more fiddly than difficult, and you're stuffed if you drop any of the pieces on the floor! I'm quite surprised by how many kroot I've ended up making. I doubt they'd last long in a game, but they look nice!

Wow, that's a lot of Koots! Pretty nice work on them, they look truly menacing!