The current Tau project was always meant to be about the repainting of older miniatures instead of me buying a load of new ones. Generally speaking, I've stuck to that, and so far the biggest expenditure has been a pair of knackered battlesuits from ebay.

The second of those two battlesuits was converted to be a Broadside support suit: I used the same method that I used a few posts back, by adding a big gun I picked up in a Mantic sale. Because the gun was a mirror-image of the earlier one, I did the conversion in reverse, cutting and repinning the left arm instead of the right one. I also added a head made from some kind of Space Marine tank sensor, for that all-important "upgraded Wall-E" look.

I wasn't sure what to put on his base, so I sculpted a little rattlesnake to sit on one of the rocks and hint that the battlesuit was lumbering around the Nevada desert (assuming they have rattlesnakes there). It does look rather like a poo, though. 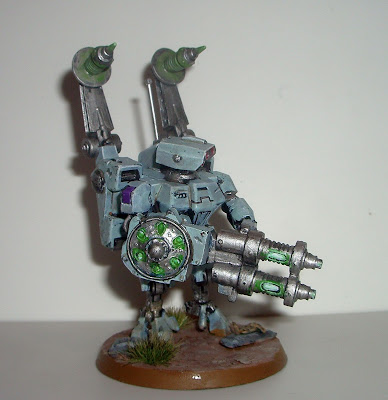 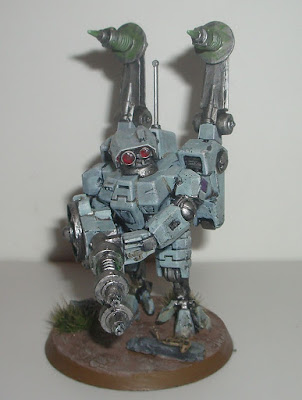 I also dug out some old Kroot models that I painted a long time ago, tidied them up a bit and gave them new bases. I like the Kroot, mainly because they're bird-people and their homeworld, Pech, is presumably pronounced "Peck". I can respect that.

Anyhow, they're not the best-painted models I've done, but they look alright and, frankly, they won't be on the battlefield for very long. As they don't wear much except trophies and weird leather bras, it was hard to fit them into the retro theme. They were painted a bright green in order to look dramatic and like something from 50s sci-fi. A few were slightly converted to be crouching down or running to make them look a bit more dynamic. 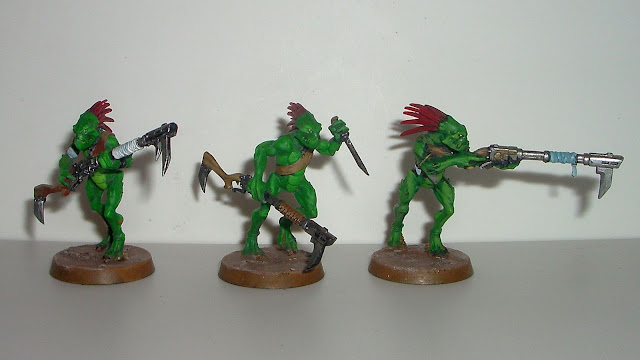 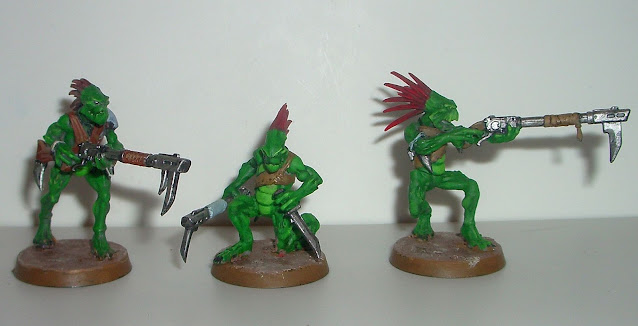 In the 40k background, the Kroot are led by tribal elders, who direct them in battle and tell them who to eat. I made one a while ago, with a combination of leftover Kroot bits and the body of a Mantic Dreadball robot, who was roughly the right shape. I think he works nicely.

I also painted a random metal object that came with a Gates of Antares field gun. I've no idea what it's for: it might be some kind of ammunition container, or perhaps where the Tau keep their eggs (are they reptiles? It's hard to tell) or maybe just the equivalent of a burning oil drum to stand around. If these guys ever see combat, I'd use it as a missile turret for the Fire Warriors. 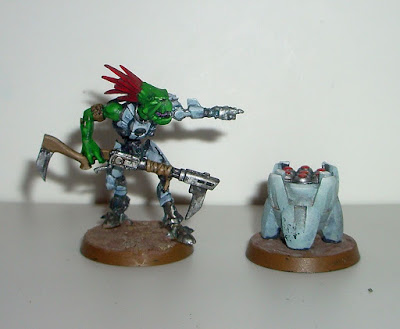 Your conversions on this project are really something. The Kroot is particularly great, I love how you combined the bits, they work surprisingly well!

Funny, I was just telling my friend I need a kroot for a conversion I was thinking of. Great minds think alike! Very cool stuff. I like how your gang is coming along. Nice paint jobs and grey progress!


Thanks very much! Only a couple of battlesuits and perhaps a leader to go and the army is finished - although I'd really like to make a flying saucer somehow...