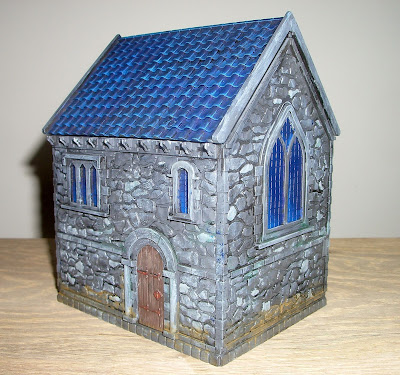 Whilst looking at random stuff on ebay, I stumbled upon a company called Tabletop Workshop, which must be about the most generic name for a wargaming company I've ever seen. (I once heard of a pharmaceutical company called Generics, Ltd, which probably wins the vaguest-name contest.) I bought a medieval chapel off them, for a very reasonable £15, and thought I'd give it a go.

First up, the kit was very simple to assemble. It consists of 7 pieces: a base, two roof parts, and four sides. The four walls are all double-sided, meaning that you get a fully sculpted interior as well as exterior. The sides slot into the base and push together without much trouble. The roof parts have to be glued to each other, but you should only do that, so you can lift the roof off and see inside. If you really wanted, you could dismantle the chapel and store it in flat pieces (except for the roof). 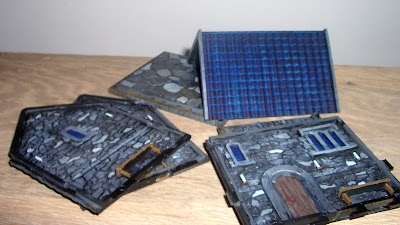 The sculpting is good. It's not amazingly detailed, but the stones stick out nicely from the walls and details can be picked out without much trouble. The inside has sculpted-on benches, candles on little holders and a crucifix. None of these stick out very far, so it's easy to move models inside the chapel. While the chapel would do for almost any European setting from the medieval period onwards, it might look a bit odd to have a crucifix in Warhammer. If it does, you could just paint over it or stick something else on top, as it's pretty much flush with the wall. 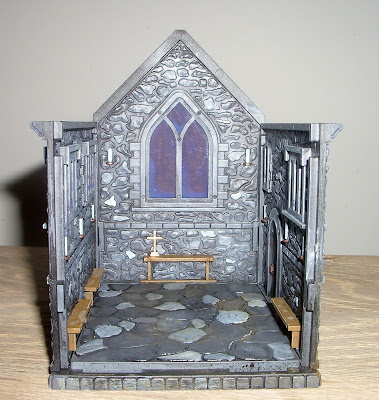 Everything was simple to paint. You could probably add more details without much trouble, if you wanted something less generic, but I'm happy with the result. Overall, I think this is a nice little kit and well worth the money I paid for it. 8/10. 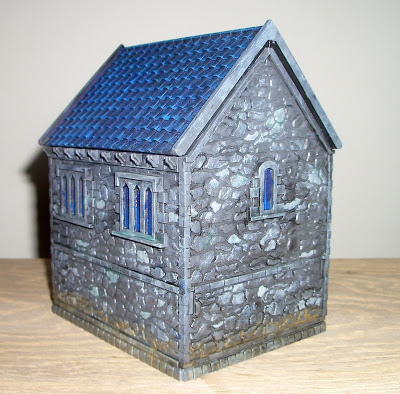 Pretty nice kit and cheap for the level of detail - is it resin or a 3D print?

It's actually plastic, which I think is a definite plus. Resin is heavy and hard to work with, and I've not had much luck with 3D prints so far - they always seem to have a lot of lines on them. They do five or six kits in a similar style, including quite a nice stone tower.