Well, it's been a while. For various reasons, I've not done much recently. The combination of the ongoing pandemic and awful heat in the UK hasn't made for ideal painting conditions. Hopefully, the weather will improve soon, by which I mean it will rain for a month non-stop.

Anyway, ages ago I stripped two very old models from GW's pre-Necromunda game, Confrontation. They're tech gangers, and are absolutely excellent sculpts. They've got a very cyberpunky feel, and have all sorts of great details. In fact, they're so nice that I didn't want to hide the details by giving them two-handed weapons that they'd carry across their bodies.

One of the gangers got a pair of arms from the ever-useful Genestealer Acolytes kit. The other's arms came from the Skittari Rangers set. I converted a sword and a sensor-type device into a torch for him to hold. The modern arms work well with the old models, and give them a bit of character: one guy is brandishing his weapons dramatically, while the other is creeping forwards. The bases were made out of textured plasticard and a Warlord Games base cut in half. Here's a WIP: 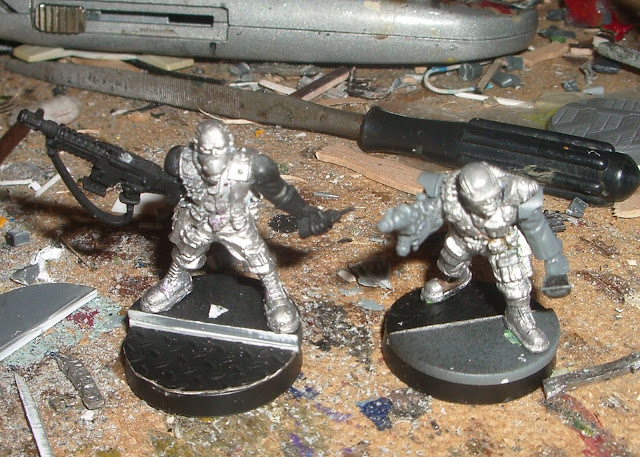 For painting, I wanted to use fairly bright colours to show off the details and stop them looking drab. The guy with the torch got a red jacket, which makes him look oddly like he stole it from either a British Empire soldier or a low-ranking minion from Star Trek. Oh well. 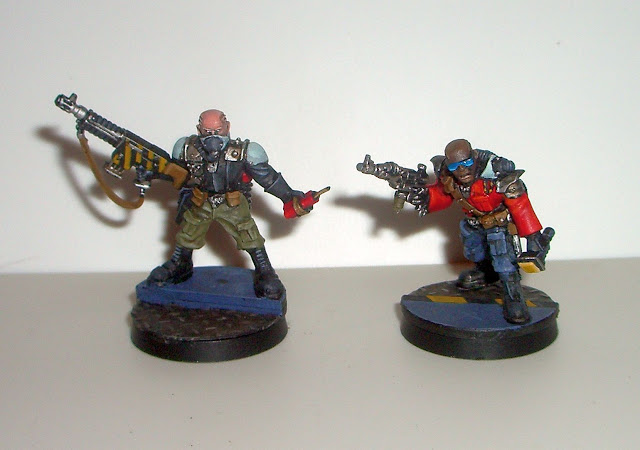 And here's a rear view. As you can see, both of them have implanted head-sockets, and breathing apparatus. The guy with the autogun also has an electric drill and a spanner for last-minute repairs! 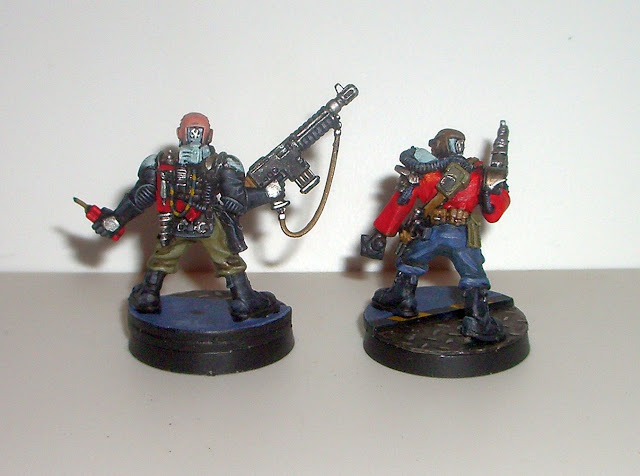 And here's a final pic. 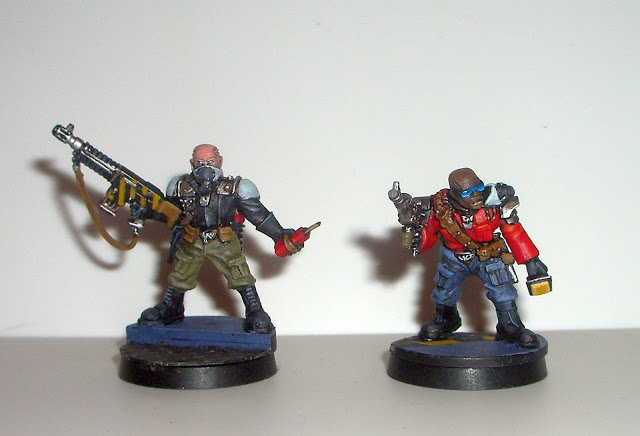 I'd love to get hold of some more of these guys, incidentally. If anyone's got any spare, do let me know!

Tech gangers are probably my second favourite set of Confrontation figures (after the Bratts!). Great job on these - the arms fit perfectly and I love that dark skin with the red jacket.

Thanks, Axiom. I really like how GW went full-on with the high-tech, cyberpunky look. The red jacket was pure luck - I remembered someone wearing a similar jacket in a William Gibson novel and gave it a try. It seems to have worked!

Thanks Spacecow. They were really fun to paint!