I see that I've got at least two new followers! That's almost doubled the number of people who read this blog! Welcome to the roll of alleged honour!

As Christmas gets closer, and Britain enjoys its last week of functional democracy, what could be more festive than a couple of bright red mad people for Frostgrave? Not only are they in the livery of Father Christmas, more or less, but Frostgrave is snowy in the background literature but actually isn't in practice, just like Christmas in the UK.

First up is a sorcerer, who will either lead the chaos warband into Frostgrave or be its deputy leader. He is Azoth the Faceless, from the Heroes for Dungeonquest box from many years ago. I've not painted him in the same way as the original model, as I prefer my own colour scheme. His impressive helmet, magical brass skull and habit of shaking his fist at things mark him out as a true villain.

He was a real pleasure to paint. Some of these older models, lacking the detail and sharp edging of more recent plastic sculpts, make for very pleasant painting. 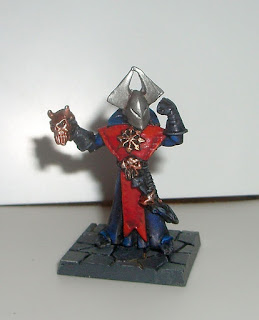 Next is a cavalry model from Gamezone Miniatures. They've produced some really good not-Warhammer style models, and their chaos cavalry are very decent. This chap was originally a drummer for a regiment, but I didn't put the drums on when I assembled him, so now he looks like some maniac about to go berserk with two maces as his horse charges into battle. 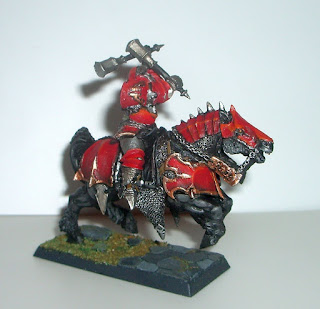 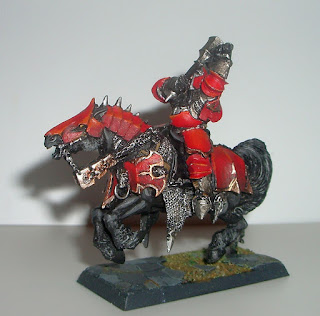 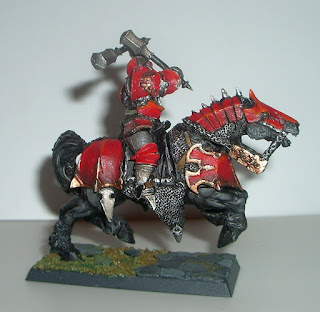 When painting this model, I used a technique from the Heavy Metal painting guide: to draw the eye to the right parts of the miniature, paint the rider in a lighter colour than the steed. In this case, I used a black undercoat for the horse's armour and a white one for the rider's. I'm not sure if this has really worked here, but I think he looks nice.


So that's another warband almost finished. I've got some crossbowmen for the undead that I could paint, and a lot of individual adventurers. I'm also planning to paint some Warlord models: I've got some very cool Civil War horsemen, and a group of samurai. But we'll see.
Posted by Toby at 12:03

Brilliant work on the Chaos chaps!

The mace wielding knight looks the business and I've found that lots of the older sculpts are far more pleasing to paint than the new, sharp, super detailed gubbins that require so much more effort to get a decent finish with!

I love Oldhammer models, there's something about them that most modern models just can't beat. Maybe it's because they're a bit more cartoony. Lovely work on the sorcerer and knight. The knight is a great conversion and the sorcerer is a prime example of the goodiness from the 80's and 90's.

Thanks guys, much appreciated! Yes, it might be the cartoonyness. I think it's more a fantasy rather than SF thing for me, too: perhaps the fantasy models need less crisp edges as they're either in battered armour or robes. Anyway, I've got more to get on with!