A Granary for Frostgrave

On Christmas Eve, as I was desperately buying presents and cards for people, I went into the local art shop and bought another little wooden birdbox for a few pounds. A while back, I used one of these to make a fantasy cottage.

This one was smaller and more solid: too small, I thought, to work as someone's home. I decided that it would work as a granary for the little town. That meant that it would have no lower doors, to prevent rats getting in and eating the crops inside. I used my standard method of putting on timbering with coffee stirrers and tiling the roof with bits of card.

I also used coffee stirrers to make the planks for the upper door. The metal bars on the door were made with strips of plastic cut from a blister pack, and the lock was made with a bit of wire bent into an L-shape and some bits of Green Stuff. I added a ladder and a spade that I had lying around to hint at the function of the building. 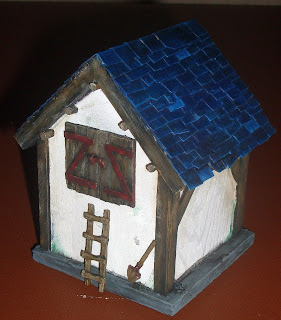 And there it is. The base is a bit thick, but maybe that's to keep the rats from tunneling up underneath. Here is the granary in the little town. In a typical scene from the period, we see an evil dark lord and his henchmen demanding grain as part of their plan to conquer the world, while an idle youth looks on. 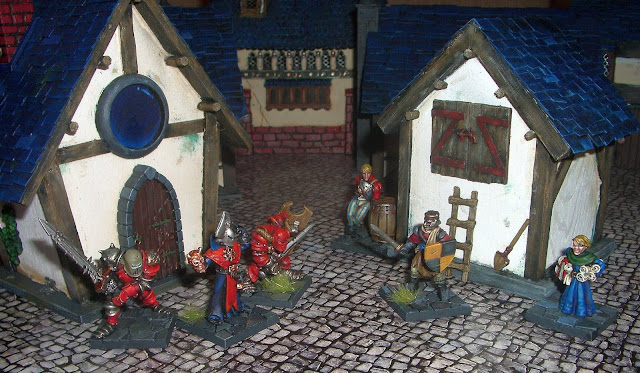 I'm hoping to try out the single-player campaign from the new Frostgrave book, Perilous Dark, so the more terrain I can get, the better!
Posted by Toby at 09:05

Not a big fan of the blue roof to be honest, but it is a pretty neat idea and I like to structure. The door with the lock in particular looks outstanding.

Thanks - the roofs always seem to come out more blue on my camera than they are in real life. i'm glad you like the door - for me, detailing is really important in making terrain.