For a long while, the Chaos Space Marines have had the option to use Obliterators. Obliterators are a sort of super-terminator, who have become one with their equipment and are able to spontaneously grow guns from their arms. Originally, they had small models, but about ten years ago, models were introduced that looked like this: 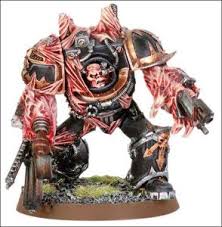 Hmm. I've got to say, this isn't a model that I particularly like. For one thing, the flesh tones and the multiple gun barrels made it look very busy. For another, the face isn't great. And for a third, more importantly, the pose of the legs is really strange. The legs and back are a one-piece lead casting - a huge lump of metal. It occurred to me that, if the legs worked better, and the paint scheme was more subdued, the basic model could work fine.

I hacked away at the legs with a saw, basically removing everything between the knee and the hip on both sides. Then, using wire and green stuff, I pinned the lower legs to the body and waited for it all to cure. After that, I got to work with more green stuff and sculpted the new thighs, to make the model more upright. 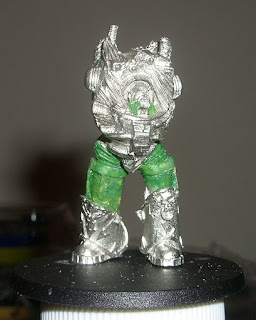 I actually didn't make many changes to the arms and chest. The model was given a new head, which I'd hacked off an Imperial missionary years before. The new head was screaming and had a beard, which I merged into the armour with green stuff, and which would represent the obliterator's head merging with his equipment. 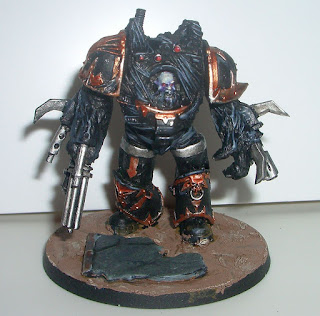 Time for paint. I decided to paint the flesh colour as warping armour, to keep the model more subdued and to tie it in with the rest of the soldiers. I think that the raw flesh colour gets slightly over-used a lot in GW's Chaos colour schemes. The face was painted pale blue, washed purple and highlighted with pink skin, in keeping with the bare heads of the chaos marines. Overall, the model had the same not-quite-Black-Legion colour scheme that I've used for the newer bigger marines.

I think he's a great improvement. I intend to make two others, probably not in the same way, but to about the same size. I expect this guy will be the most human of them all - which isn't saying much!

Great sculpting work Toby, I have noticed you have started to rely more on cutting out portions of models and sculpting your own replacements. How long until we see a Captain Smith crew sculpted by your own fair hand?

Thanks - I'm getting more confident with sculpting, but it's very much early days so far. I wouldn't mind converting Smith and friends, though. Hmm...

Much better, that's a huge improvement you made.