This week, I finished off one of the models from the Carnivale pile. This guy is an Officiant of Dagon, the Lovecraftian fish-god whose minions seek to overrun the city of Venice from below. I'm not sure if this chap is meant to be part-fish, or whether he's just a crazy human who works with the cultists of Dagon, so I've painted him in the usual skin tones and given him a very slight glaze of green. 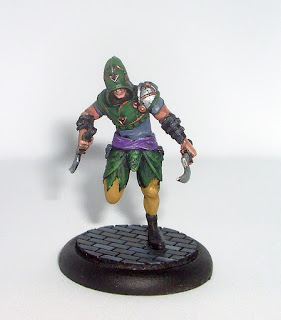 This photo was taken largely to show that he has two legs. 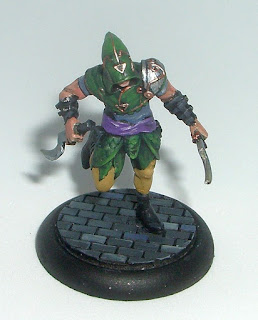 And here is the entire sordid family. I'm sure they would click their fingers like the Addams Family, except that probably doesn't work underwater.


Apart from the Slaves of Dagon, who I don't really like, I've got two fishmen left to do: a massive chap who looks very fat and blubbery, and a human/Deep One hybrid who looks strangely like an aquatic Terry Gilliam.
Posted by Toby at 10:41

Brilliant looking team so far, I like the tentacled mess under the big one's base.

Thanks - the big guy has a Wyrd sewer base. He's an older metal Carnevale model - all the rest are the newer resin miniatures.