Robot Factory 2 - At The Ruins of Ryza

Both of you who read this blog will by now be used to a certain level of high-octane, adrenaline-filled excitement in my posts. I'm afraid this is going to be a rather more sedate one.

First up, I've been experimenting with reposing the legs of Necron warriors, because that's the sort of wild, hard-living guy I am. This was done with a lot of fiddly cutting at the knees and hips, and some bending of the ankles. It's time-consuming, but it does make the legs look considerably less crap. 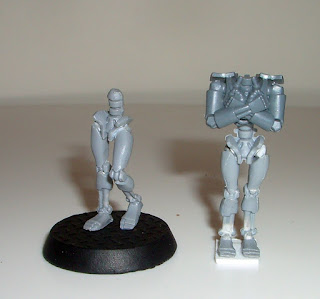 The body on the right uses repositioned warrior legs and a torso from something called a Tomb Barge, apparently. I like the mummified-corpse look. Two of these will be flanking the entrance to Lord Mechatep's domain, like this: 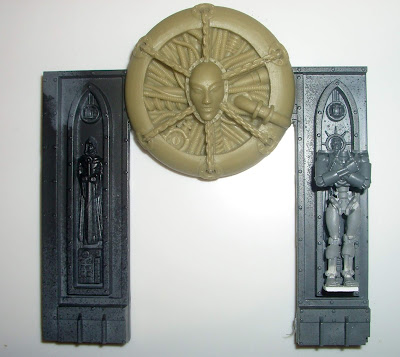 The face in the centre is one of those beautifully-sculpted but completely impractical bases by (I think) Secret Weapon Bases. I'm not sure if it's a bit too much, but it scores well for creepiness.

I've also been working on the walls for the ruined robot factory, home of Lord Mechatep of Pskainet. For the walls, I used the GW Ryza Pattern Ruins scenery set. This is a cheap set, less than £20, of molded slot-together walls. They are solid, nicely detailed and - get this - not covered in bloody skulls for once. They were easy to assemble and paint, and I'd recommend them to anyone (within reason - I doubt my Grandma needs any right now).

I went for bland industrial colours: faded cream/white for the outside, and a dull blue/grey for the inside. I washed the walls with the incredibly useful but weirdly named Umbral Umber from the Privateer Press range, and then sponged on lighter shades of the base colour. I decided not to go into too much detail: I reckon the builders would just have sprayed everything the same colour.


An external wall, at convenient height for models to duck behind. 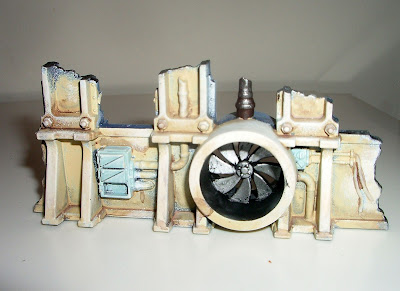 This one has a control panel. Note the gothic archway above the window, but the daring lack of skulls. 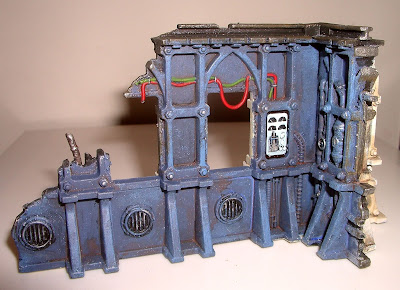 This, in my most ominous voice, is how it begins.

Your right, I'm not used to this sort of wild and hard-living approach to your posts. Woahh there cowboy!!!

I've stuffed about re-positioning the RBT-01 marines quite a few times. I like the results, but it can be a pain to hide the joins.

I think the Necron conversion worked out great! And yes, those scenic bases bemuse me too. I don't think I'll ever go down the path of using a highly detailed base to mount my, frankly, quite boring minis on. Those bases are odd.

Your scenery is lacking in skulls, that is good.

I saw your conversions of the RT plastic marines. That must have taken a hell of a long time - they are in very weird squatting positions. I think a whole army would drive me mad.

Some old models have charm, and others less so. The necron warriors just need resculpting if you ask me. Still, the new legs will go a long way (if you see what I mean).

I bought the bases because they were going cheap and they did look nice. I agree that they're bloody impractical, though!