Of Legs and Shoulder Pads

This week, I'd hoped to do more work on the robot factory, but the parts didn't get to me. Instead, I bought an old Dark Eldar model, from about 1998. I've not been able to find a good picture of this, but basically, it's metal, and from a time when the Dark Eldar range was... well, let's say that they've not aged well. This particular model (a female Archon) was pretty battered, and cursed with shoulder pads that would have embarrassed the cast of Dynasty.

I removed the arms with a hacksaw, and replaced them with a modern plastic Dark Eldar left arm, and a right arm from a Skitarri ranger. The sleeve of the ranger's arm had to be cut down and pretty extensively built up with green stuff. She also got a new, huge, shoulder pad made from the blade of an old elf axe. 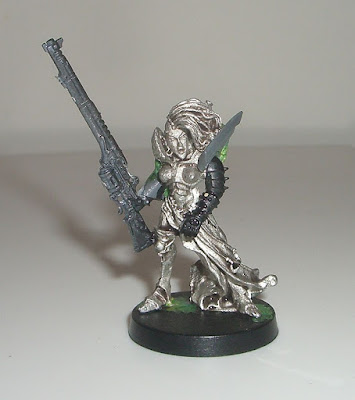 I'd originally intended a Tank Girl riot of colours for this model, but as I put it together, it seemed more goth than punk. I went for a more subdued black and green colour scheme, with orange as a contrasting spot colour. She looks like someone from a 1980s science fiction film:

The year is 1997. Atomic war has reduced the Earth to looking like a disused quarry. Radioactivity has inexplicably made animals large and angry. Bandits roam the land, in the service of the deadly Queen Spatula. Only one man can save mankind - Dirk Rockwell, the Freedom Cop!

Here's a rear view. I really like the sculpting of the cloth, and I'm pretty pleased with my paint job. 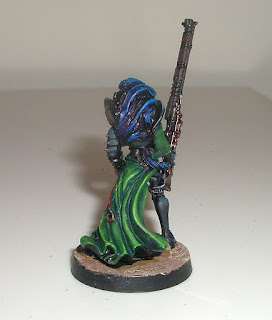 On the subject of dodgy models, Necron warriors are a bloody pain in the arse. These really need a re-sculpt: not so much a redesign as some new poses and the ability to turn their heads without snapping their necks. I like the concept, but they're not easy to make. Anyhow, they do look a lot better walking forwards, rather than the bow-legged standard pose. 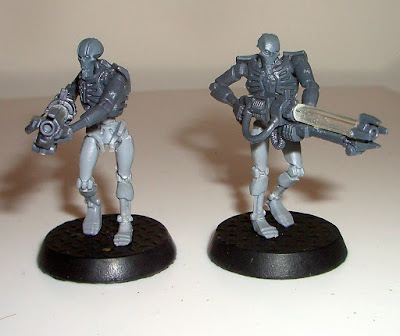 Great conversion work on both Toby. You really nailed that female mini...pun intended :)

The Necron pose change has made a big difference. I don't know why GW pose a lot of their mono-pose minis all hunched over. Maybe it makes them smaller to package? Standing up and striding towards the enemy is a much braver way to behave on the pretend battlefield anyway.

Thanks! The Necron models do look better upright, I agree, but it would drive me crazy to have to do an entire army like that. Still, it does completely change the style. They look much meaner!