As promised, here are the last of the Frostgrave explorers. I've run out of the nice bases for now, so I'm going to take a break from them until the next batch arrives.

This charming fellow is Gutlag Executioner, or so said the 1988 Citadel Catalogue (the red one). I must have bought him when I was about 14. He's one of my favourite models ever, although I don't really know why. I think it's that he looks wiry and mean, without being a huge lump like the current ogre models. The combination of his hood and protruding jaw makes him look dozy and vicious. He reminds me somewhat of Les Edwards' illustrations for the comic book of Rawhead Rex. 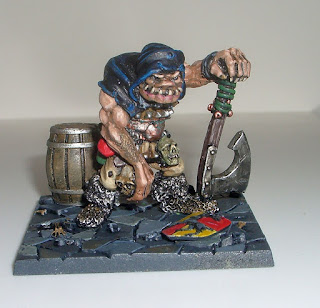 It was difficult to get the colours of the group onto a model that looks best in dark shades, so I cheated and added a bright shield to the base (it needed filling up, as it's slightly too big). Maybe the others gave it to him to wear and he's just tossed it on the floor in a sulk. 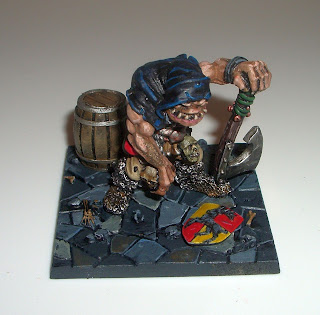 The painting was fairly standard, although I added brown into the usual flesh colour. For some reason this looks better on large expanses of skin: it feels less raw than usual.

The last model is another fantastic sculpt by Westfalia Miniatures. She seems to be some sort of armoured cleric, having the magical combination of armour, hammer and really big book (I wonder if people use really big books as extra armour, or just to while away the hours at the camp fire?). 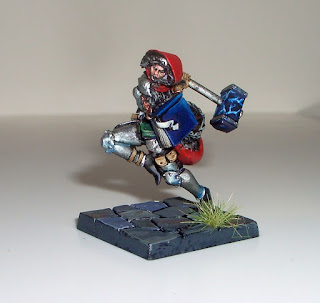 Actually, the hammer was so big that I struggled to work out how to make it look wieldable. I considered painting it as wood, but it looked like a comedy mallet, so I painted lightning on the head to make it appear magical. I feel sorry for Night Lords players, who have to do that on every miniature. 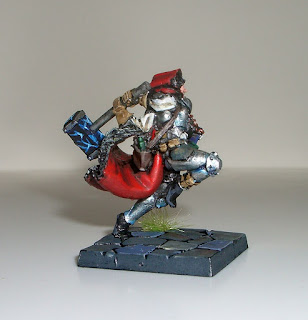 Perhaps she is about to take on the skaven hordes as they burrow up from beneath, in an epic battle of Whack-a-Mole.
Posted by Toby at 10:57

Those Jes Goodwin Ogres are the best hands down I reckon. I've got a few of them in my collection too Toby, but this ugly fella. What makes him stand out for me is his sharpened teeth, his axe and the twist in his right arm. The way it hangs by his side is quite unique.

The last mini is a little funny, she looks like she's been caught half way through her hammer throw :D You did a great jon=b on her hammerhead though!

Thanks very much! They were really enjoyable to paint. It makes a change to use bright colours like that too.

Thanks! You're right about his arm. It's quite unusual.

I find it odd how these older metal sculpts are often much more fun to paint than the new crisp ones. I think it's because a lot of these metal minis were sculpted as individuals. If you look at really old White Dwarfs, the fantasy regiments are often a real mix of weapons and poses.

I really like the second model, but she is in a full on berserk-rampage pose. The lightning was really tricky. Another good reason not to get a chaos marine army!