This week, I thought I'd take a break from the usual science fiction stuff and make some of the fantasy models that I'd had lying around. Since they aren't obviously from the same army (or even the same species), I thought I'd paint them as an adventuring party, the sort of thing you might have in Frostgrave.

First up, a pair of hired swords - or rather one hired sword and one crossbow on loan. They are both from the standard Frostgrave mercenaries boxed set: they're decent enough sculpts, but a bit on the small side. I gave the crossbow woman a Statuesque Miniatures head. 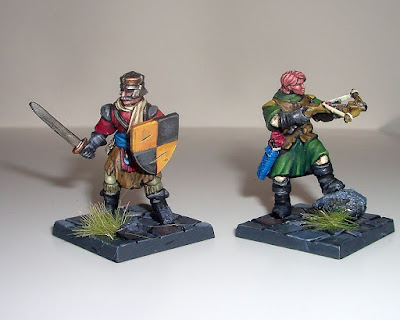 As with all these models, they're mounted on sculpted bases from Mantic's Dungeon Quest game.

The next pair are a metal dwarf from Citadel (probably a very old model) and a swordswoman from a Kickstarter that I backed ages ago for a company called Westfalia Miniatures. Their stuff is very good, almost as well sculpted as Black Scorpion's, and a pleasure to paint. Anyhow, the dwarf's slotta-tab said "Nobby" on it, so that is now his name. The swordswoman I will call Blanche, as I've painted her to look somewhat like Snow White. Perhaps she has just woken up and is looking for the rest of her dwarves. 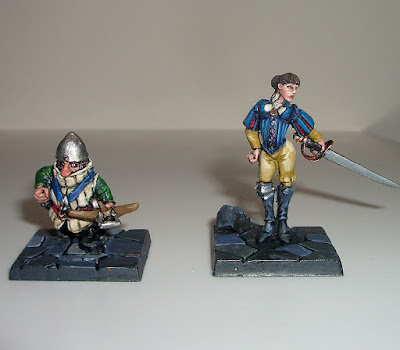 Next we have Sir Vaylance, last seen driving an Imperial titan, who was made largely out of a chaos warrior and a brettonian knight. He is rather large.

And finally, Glurk, an orc wizard. Glurk was a very old 40k ork boss. I gave him a new arm from, I think, a plastic savage orc, and a staff with a necron bit on the top. He looks rather friendly, if a bit dim. I think he would make a good shaman. 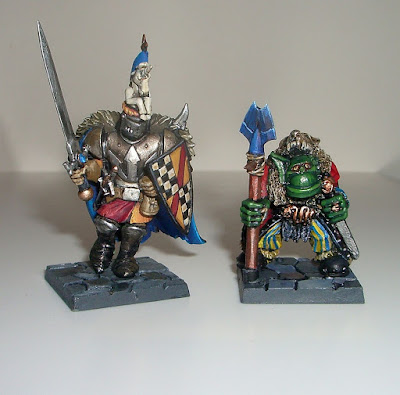 I'm not sure what I'll do with these guys, but I like them. There's something about jolly retro fantasy characters that quite appeals to me. On which subject, I've got a metal ogre that I probably bought when I was about 13. I might do him next.