Night was falling across the nightmare landscape of the Wasteland and its foul inhabitants were creeping from their lairs, hungry for meat and blood. On the other hand, it was the weekend.

"Hell no," replied her friend, Wizbit Murdah. "Let's buy some Spook off Dave the Guilder and smoke it. How's that for a plan?"

A shadow fell across them. They turned: in the doorway stood Julie Android, the feared gang leader. "Your plan sounds quite atrocious," Julie replied. "I can't condone that sort of irresponsible drug use. One puff of Spook and you'll be craving Mars bars."

"But where can we get Mars bars around here?" Oboe demanded. "Only the tech-priests know how to make them."

"True, but there I know of a consignment nearby, in a ruined petrol station. To arms, girls!"


Fresh blood fell on the dark earth this weekend as two fierce all-female gangs went head-to-head in savage combat. A shanty town that had grown up around an abandoned Dinogas station was the scene of the battle.


James' fierce crew spread out behind a ruined spaceship (most towns have one of these), led by the formidable Morwenna Clench. 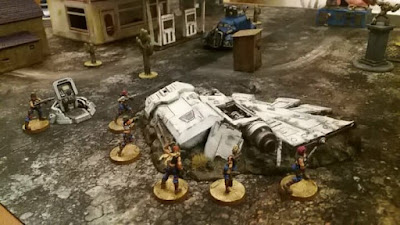 They then moved up towards the petrol station, where genestealer Magus Elron the Credible had foolishly parked his garish limousine.

The fighting was some of the most vicious I've ever seen in a game of Necromunda. Hardened gangers were knifed, shot, set on fire and blown up with grenades. Fighters hit the ground only to stagger upright and battle on with flesh wounds. Brutal killers like Gabba Odyssey and Chocolate Giddyup won their spurs. And time after time, James and I passed our bottle rolls.

At last, my crew had had enough. Filling their pockets with sugary comestibles, they fled the scene. 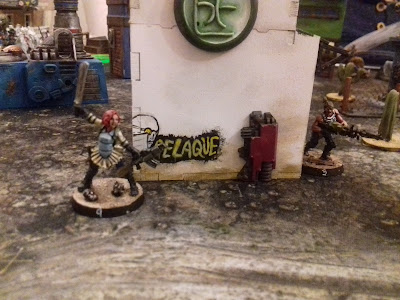 By some weird fluke, neither gang sustained serious damage, even though each of us lost five loyal soldiers to injury. It was one of the best games of Necromunda I've ever played, and one of the toughest. The two new gangs have got off to a ferocious start!
Posted by Toby at 15:17