My Body Lies, But Still I Rome

Dawn crept between the trees of the Drakwald forest. The weak light caught on the armour of the Infelix Legion, on broken buckles and scratched metal plate. The legion stood silent along the edge of the clearing, mist swirling around their fleshless knees. Under tarnished helmets, hundreds of empty sockets stared across the grassland.

General Publius Enimicus turned from the battle-line and trudged up the hill. Behind the ranks of soldiers, the army's augur was bent over, his hat wobbling as he made strange gestures to determine the will of the gods.

"Flavius, old friend," Publius growled. "Do the gods smile upon us? Is it time for battle?"

Flavius Flavor consulted the sundial that he wore around his bony neck. "Truly, youth! You know what time it is?"

"Yes. It is a time of war, Flavius, a time of strength and honour. We swore an oath to destroy the barbarians of Drakwald. Today we honour that oath. We will not rest while their lord Sigmar lives." He looked up at the grey sky. "Some day, Flavius, we will have our victory. Then I shall return home, to vineyards and warm sun, where my wife Aggripina Colada waits for me."

Publius lurched down to the front rank of his men. He drew his sword.

As one, the Infelix Legion raised their huge, torn shields. Publius heard the clatter of metal and, under it, the deathly rattle of bone. "For Rome," he cried, "and forever!" 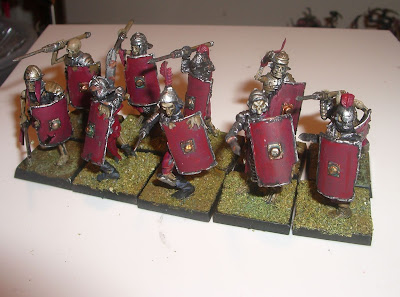 Everyone loves undead Romans, assuming that by "everyone" you mean "me". The two main elements - being a Roman and being dead - just seem to go together. I probably watched Jason and the Argonauts too many times when I was young (although that was the Greeks). The models here were put together out of Warlord Games Roman veterans (hence the battered shields), Mantic armoured skeletons and Games Workshop skeleton warriors, and very fiddly they were too. 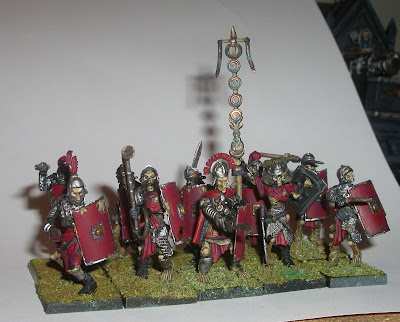 I've no idea what these are for: there are too few for a Fantasy-battle type legion, and I don't really play any other fantasy games at the moment. As you can see, I painted these models fast and badly in a stylised, atmospheric manner. As much as anything else, they were a pleasant break from the more exact stuff I've been doing of late. Individually, they may not look like much, but as a group, they've got a certain something. And isn't that how the undead work?
Posted by Toby at 15:18