Work continues on this mighty opus. I've added a bit of detail to the legs and begun work on a body. This was made primarily from the lower half of some kind of transparent plastic jar, with the lid of a baby-food packet stuck to the bottom.


The large black disc is a circle of textured plasticard, which will provide a "floor" that goes on top of the body. It will end up as a viewing platform, on which an explorer can stand while the walker is lumbering along under him.

A while ago, I read an article by a painter - if not actually John Blanche, then someone of that school - who said that when converting miniatures he assembled the model, added the conversions he wanted, and then tried to make it look as little as possible like the original model by covering it in "stuff". I've gone for a similar idea, adding bolts, pipes and inexplicable off-cuts of plasticard to suggest some kind of engine. The bolts were made from those little cylinders that stick out of the tops of sprues. The pipes are headphone cable.

Anyway, attaching the legs to the body results in this: 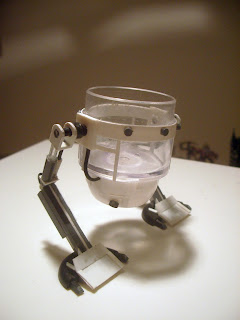 Which isn't bad, really. It's lacking in stability, but I'll attach it to a base to hold it all together. A few more details and a bit of joint-strengthening and it should be ready for painting.

I put this up on a Facebook group, and friends suggested that the walker looked slightly like a cup. Clearly my subconscious was trying to make a mug of tea instead of a robot. Fair enough. Following on from this, I added some little arms and an exhaust/handle at the back. 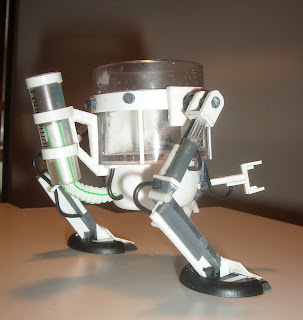