Yesterday the streets of Necromunda erupted into violence (again) as gang took on gang in ferocious combat. The clashes broke out around the market square in an area of territory near the fashionable Inexplicable Ramp district.

The two gangs responsible were, first, the notorious Filthy Rag gang, led by their hideous commander, the dreaded Biscuit Tuesday (and painted by my friend James):


And, secondly, the much feared Terror Bird Cavalry, captained by the ruthless desperado Algebra Flaps (and painted by me):

Authorities had been hoping that the two sides would settle their differences with a ritual dance-off, but within moments the air was filled with gunfire (from the gangs) and cursing (from me). Although the Terror Bird Cavalry cunningly deployed several men onto the rooftops using overhead vents, within seconds several fierce fighters, including Clam Tickler and Warbastard, lay out of action. All the attackers could do was pick themselves off the ground (literally) and run off home to lick their wounds (not literally).

But all was not over.

Back at his lair, Algebra Flaps swore vile oaths and demanded revenge. Flaps had not been so grievously humiliated since he had been named. He needed to strike back against his enemies, but he would have to choose the right moment to attack. When better, he thought, than when they were at their weakest?

Meanwhile, the victorious Filthy Rag gang had decided to celebrate in the traditional Necromundan manner - by buying a kebab and perusing the local antique stalls. As hard-bitten gangsters do, they formed an orderly queue outside the kebab stand owned by meat impressario and part-time genestealer magus Elron the Credible. Little did they realise that they were being watched. 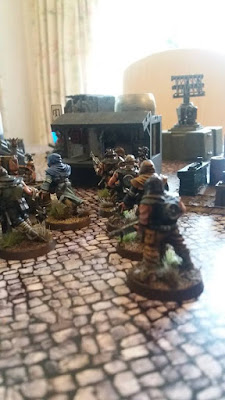 The Terror Bird Cavalry launched a vicious assault from behind. Warbastard, freshly repaired, took vengeance for his earlier disgrace by cutting down two of the Filthy Rags with his heavy stubber - before he was battered to the ground by the juve known as The Reprisaliser.

The two master criminals clashed, and Biscuit Tuesday of the Rags took out Algebra Flaps with his flamer. But the Terror Bird Cavalry intended to live up to at least a third of their name. Four enraged gangers leaped at Biscuit Tuesday, and he was felled by the combined efforts of Keith Violence and Burrito Discharge. As the remaining Rags took shelter behind the Genestealer Cult Information Booth (join today!), Emmanuelle Porridge of the TBC shot Jerk Manpassion of the Filthy Rags. 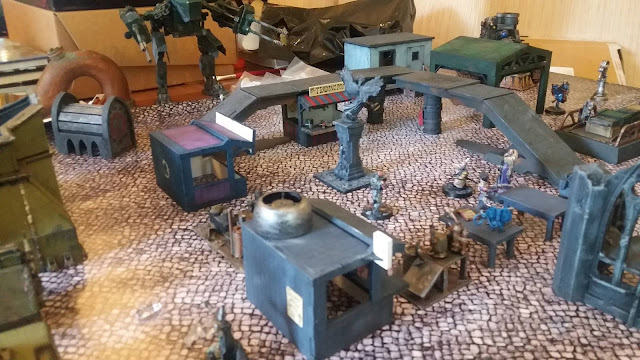 Despite the carnage, the Terror Bird Cavalry had had enough and they slipped away, leaving the marketplace and kebab stall in the possession of the Filthy Rags. It was a Phyrric victory for the Rags, though, leaving both sides badly mauled. As silence fell over the Inexplicable Ramp district, the combatants retired to their dens of iniquity to plot, scheme and glue some new guns on.

Awesome Toby! Like a burp after a good curry, this is even better second time round!

Well said Wilde! It certainly was a clash of the titans!

Now THAT is what I call a fuckin brilliant batrep! I laughed out loud a few times at the names too, my favorite being "The Reprisaliser" :D I was amazed that the laughable nicknames names just kept on coming too, there looked like there was no end in sight to the inappropriate monikers on display.